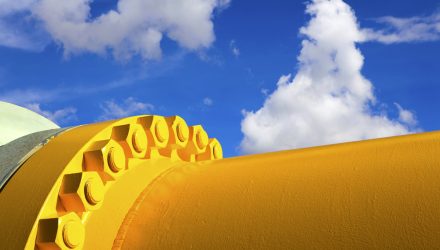 The United States Natural Gas Fund (NYSEArca: UNG) rose 3.6% on Thursday and increased 44.3% over the past month. Meanwhile, Nymex natural gas futures were up 4.1% to around $7.3 per million British thermal units.

According to the U.S. Energy Information Administration, natural gas stockpiles rose modestly for the week that ended April 8 but remain almost 25% below last year’s levels and 18% below the five-year average for this time of year, the Wall Street Journal reports.

Natural gas prices typically fall off in the spring as heating demand declines with the warming weather conditions. Prices usually then pick up again for gas-powered electricity demand to help stave off the sweltering summer months.

However, geopolitics and global supply chain issues have fueled a sharp jump in the commodity’s prices in 2022.

All energy prices have been elevated since the Russia-Ukraine war and subsequent Western sanctions on Moscow, which have contributed to lower demand for Russia’s oil and natural gas exports. The U.S. has outright banned Russian oil imports, and Europe has been mulling over the idea as well after the alleged war crimes unearthed in Ukraine.

Consequently, the U.S. has increased liquefied natural gas exports to Europe, driving up prices to their highest level since 2008.

“Global natural gas markets are likely to be laser-focused on energy and national security interests due to the ongoing shift away from Russian energy imports in the West,” Ryan Fitzmaurice, a senior commodity strategist at Rabobank, told the WSJ.

“We can envision further advance to about the $7.35 area when looking out across next week. Overall, this doesn’t feel like a market ready to establish an interim price top,” Ritterbusch & Associates analysts said in a note to clients.

“A chilly late season weather system with heavy rain and snow will track through the Midwest today with lows of teens to 30s, then spreading across the eastern U.S. Friday through early next week for stronger than normal national demand,” NatGasWeather.com says.