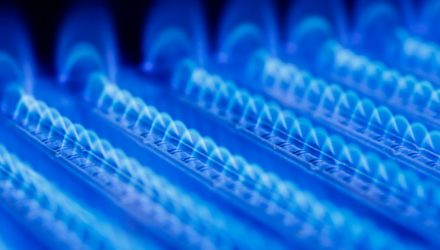 A brief arctic blast is scheduled to bring in some of the coldest air this season for some, but it won’t be enough to reverse the weakness in natural gas markets and related exchange traded funds that have suffered through an ongoing supply glut.

The United States Natural Gas Fund (NYSEArca: UNG) rose 0.3% Friday while the Nymex natural gas futures were 1.2% higher to $1.85 per million British thermal units. However, UNG is still down 15.1% year-to-date and 38.2% lower over the past year.

Weighing on the natgas market, stockpiles are now more than 30% higher year-over-year, reflecting weak fundamentals from an ongoing surge in supply from the shale oil industry and tepid heating demand in a mild winter, the Wall Street Journal reports.

U.S. inventories of natural gas declined 115 billion cubic feet over the week ended February 7, but stockpiles still totaled 2.49 trillion cubic feet, according to Energy Information Administration figures. The total stockpiles now sit at 32% above their levels for this time last year and are 9.4% above the five-year average.

Milder-than-expected temperatures have swayed consumers from turning up the heat this winter as front-month natgas futures declined to their lowest level in almost four years early this week.

Looking ahead, traders expect supplies to remain robust, even as cold temperatures could temporarily boost demand in the coming days due to a brief arctic blast that could bring colder weather down from the North.

“This cold front is moving through the rest of the East and South, sending temperatures tumbling quickly behind it and bringing a short break from the above-average temperatures that have dominated much of the United States this winter,” according to the Weather Channel.

Nevertheless, hedge funds and other speculative traders are betting on low prices. Investors have pushed net bets on lower natural-gas prices to their highest level ever, according to Commodity Futures Trading Commission data going back to 2006. Bearish bets on prices exceeded bullish bets by 315,000 contracts for the week ended February 4.