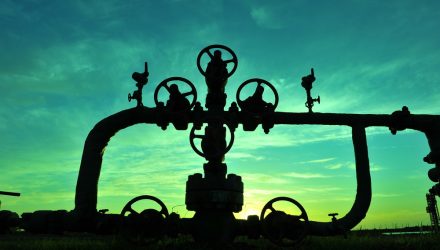 Among the best-performing non-leveraged ETFs of Monday, the United States Natural Gas Fund (NYSEArca: UNG) rose 6.7%. Meanwhile, Nymex natural gas futures were up 8.0% to around $7.88 per million British thermal units and hit their highest level since September 2008.

“With momentum firmly bullish and the market ill-equipped to handle any further bullish shocks, notable continued gains for natural gas remain likely this summer,” according to EBW Analytics, CNBC reports.

EBW Analytics also added that a “bullish weather shift” has sent the U.S. market into “overdrive.”

Natural gas prices have jumped as strong exports, notably to gas-starved Europe, and below-normal temperatures contributed to a tightening supplies.

“LNG exports have taken on more significance with geopolitics and demand from both power generation/ industrial usage are strong. The US role as an exporter continues to increase,” according to RBC.

U.S. natural-gas supplies are tight, “sitting 23.9% below where they were last year and 17.8% below the five-year average,” analysts at Sevens Report Research said in Monday’s newsletter, MarketWatch reports.

“Additionally, a geopolitical fear bid remains in the market and demand is expected to remain elevated leaving the path of least resistance decidedly higher with a medium-term upside target of $9.06,” the analysts added.

The late-season cold front that has swept across the U.S. is contributing to increased heating demand for natural gas.

“The impact of long-term undersupply continues to provide fundamental support to the market,” Robbie Fraser, global research and analytics manager at Schneider Electric, said a daily note. “The longer those conditions continue, the more it forces storage levels lower, in turn raising the floor for where prices can trade near-term.”