You are at:Home»Alternatives Channel»More Upside Fuel for This Infrastructure ETF 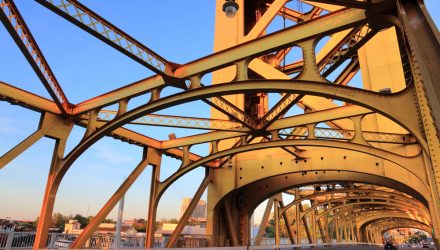 With the infrastructure conversation seemingly gaining momentum by the day as President Trump looks for a reelection sales pitch, the AGFiQ Global Infrastructure ETF (GLIF) is gaining some momentum as well and there are reasons to believe the fund can continue delivering near-term upside.

“A slew of construction and material companies are getting a boost Tuesday on a news report that the Trump administration is eyeing a nearly $1 trillion infrastructure proposal,” reports Yun Li for CNBC.

GLIF in the Limelight

“The move higher came after Bloomberg News reported the White House is preparing an infrastructure proposal in a bid to spur the economy that suffered severe damage from the pandemic, citing people familiar with the plan,” according to CNBC.

Recently, President Trump’s polling numbers are taking hits for a variety of reasons with some polls indicating he’s trailing or losing ground in some states critical to his reelection efforts. With that in mind, a robust infrastructure plan could help get the economy back on solid ground and replenish some of the jobs lost during the coronavirus pandemic.

“The report said a preliminary version being prepared would set aside the majority of the money for traditional infrastructure projects such as roads and bridges, though funds would also be reserved for 5G wireless infrastructure and rural broadband,” according to CNBC.