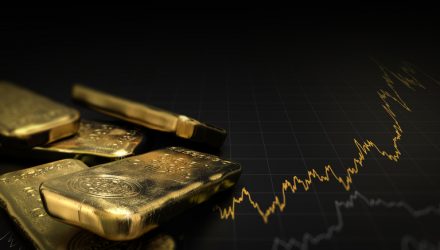 GLD added 2.43% in May as bullion topped $1,300 per ounce late in the month. Against the current backdrop of the U.S. trade war with China, the fear and uncertainty that accompany the rampant volatility, and the worst May selloff for stocks in 50 years now, gold prices will continue to rise this year, according to one financial executive.

“Investors rushed into the commodity on Thursday, pushing it to a four-month high. Gold is now just 1% away from its 52-week intraday high of $1,349.80 from February, and TradingAnalysis.com’s Todd Gordon believes it may soon surpass that level,” reports CNBC.

Bullion prices are inching closer to their loftiest levels this year on increased expectations of a U.S. rate cut, even as some investors locked in profits from bullion’s recent rally. Gold is believed by many investors to be inversely correlated with interest rates. Rising interest rates make bonds and other fixed-income investments more attractive, so money will flow into higher-yielding investments, such as bonds and money market funds, and out of gold, which offers no yield at all during times of higher interest rates, and back into gold ETFs.

“Gold has been steadily climbing this year and is now trading around a key level that has provided resistance in the past,” according to CNBC. “Since the commodity is knocking at former highs, Gordon believes that “the next $60” will see a lot of ‘buy stops going off,’ which is when traders place orders ahead of time to buy something once it hits a specific price.”

A weaker dollar and expectations that the Federal Reserve will not raise interest rates this year are other factors contributing to gold’s upside.

“In addition to gold looking attractive on a technical basis, Gordon notes that the current economic backdrop of a dovish Fed, a weak dollar and a rise in geopolitical tensions supports a boom in the commodity,” reports CNBC.