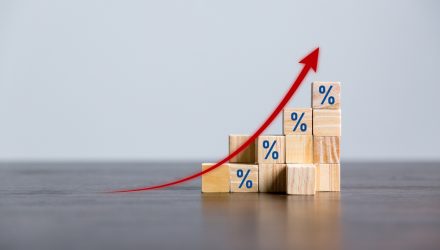 The Federal Reserve raised interest rates five times through the first nine months of 2022 with the most recent hike arriving earlier this month of 75 basis points.

Market observers expect at least another 125 basis points worth of rate increases before the end of this year and at least 50 basis points worth in the first quarter of 2023. In other words, advisors and investors should be looking for rising rates protection and plenty are doing just that.

On that note, alternative strategies, such as the Merger Fund (MERIX), merit consideration over the near term. For its part, merger arbitrage – the strategy MERIX provides exposure to – has a documented history of proving sturdy against the backdrop of rising rates.

MERIX is an actively managed fund, meaning its performance isn’t tethered to an index, but its managers frequently gauge the fund’s performance relative to the widely observed Bloomberg US Aggregate Bond Index. The “agg” is saddled with a double-digit year-to-date loss due to the aforementioned rate hikes. MERIX is performing significantly less poorly than the agg.

“The investment profile is straightforward: since inception, and for all standard measurement periods, the Fund has had a near-zero-to-negative correlation to fixed income markets, a standard deviation similar to a short-intermediate bond fund, and a positive correlation with interest rates, a point particularly relevant in the current environment. Over the past six[1]and twelve-month periods, through June 30, the Bloomberg U.S. Aggregate Bond Index was down -10.35% and -10.29%, respectively,” according to Virtus.

At the end of the second quarter, MERIX was down a tolerable 1.50% year-to-date, and with three months left in 2022, it’s possible the fund chips away at current losses. If nothing else, the potential to continue outperforming the agg and the S&P 500 remains in place.

Obviously, that’s an important trait at a time when both bonds and stocks are punishing portfolios and some traditional alternatives, such as gold and real estate, are lagging as well.

MERIX losses could be “recouped if the deals related to that spread-widening are successfully completed. Three-year volatility remains low at 3.16%, and our beta to equities and bonds is at our historical levels of 0.10 and 0.14, respectively,” concluded Virtus.