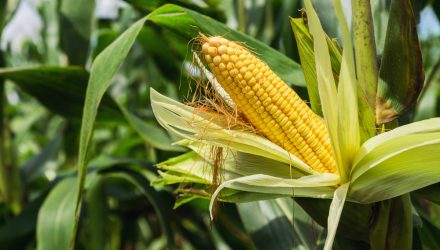 Things are starting to look up for corn prices meaning the Teucrium Corn Fund (CORN) could be ready for its turn in the commodities exchange traded products to spotlight.

“U.S. corn futures rose more than 1.5% on Tuesday to hit a more than one-month high after the U.S. Department of Agriculture (USDA) pegged the condition of crops behind market expectations,” reports Reuters.

Farmers have historically switched crops due to market conditions and seasonal or weather trends, but leaving the ground has been a new option for U.S. farmers who try to squeeze out as much out of their land as possible.

According to the latest government figures, corn and cotton plantings, in particular, were far below initial expectations, with corn seeding in June down by the most amount from March in 37 years.

“The USDA’s good-to-excellent ratings on Monday for the country’s corn and soybean crops came in below analyst expectations, falling even further than the expected 2 percentage points each as conditions in the Midwest deteriorated due to hot and dry weather,” according to Reuters.

The sudden shift has been a stark contrast from last year going into 2020, as many anticipate corn to be among the best crops to turn a profit due to easing tensions with China and rising exports through the initial Phase 1 trade deal in January. A U.S. Agriculture Department report issued in March revealed that farmers expected to seed 96.999 million acres of corn, which would have been the second-highest amount since the Great Depression.

“Corn experienced the biggest decline, with just 64% of the crop rated good to excellent, a 5 percentage point fall from last week and 3% lower than analyst expectations,” according to Reuters. “Advisory service Pro Farmer on Friday projected U.S. corn and soybean harvests will be below the U.S. government’s forecasts, with a corn crop of 14.820 billion bushels and a soybean crop of 4.362 billion bushels.”