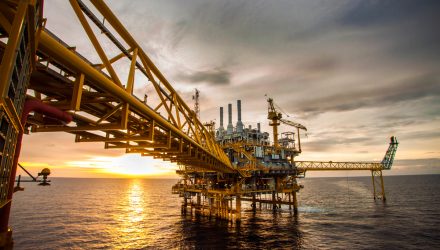 Looking at Midstream Dividends in a Tough Oil Market

The energy patch has seen its share of negative dividend action this year, meaning its crucial income investors allocate various facets of the group, including midstream operators, accessible via the Alerian Energy Infrastructure ETF (NYSEArca: ENFR).

“The Alerian Midstream Energy Select Index (AMEI), which has a 75% weighting to US and Canadian midstream corporations and 25% weighting to midstream MLPs, has yielded 5.3% on average since inception in April 2013,” said Alerian analyst Bryce Bingham in a recent note. “For context, this compares to an average yield of 7.3% for the Alerian MLP Infrastructure Index (AMZI) over the same time period. With the steep sell-off in the space, the AMEI’s yield reached an all-time high of 15.2% on March 18 and sits at 9.6% as of April 21 even with announced dividend cuts included. This is well above the historical average yield for MLP-only indexes.”

Midstream and MLP businesses are included in the ETF strategies because the segment is fundamentally related to the sector company businesses, can potentially increase yield generation, and are historically excluded from S&P 500 and Dow Jones Averages, providing another layer of diversification benefits.

“Similar to their MLP peers, several C-Corps have revised their dividend policies in the wake of lower oil prices. Through April 21, 13 out of the 51 total dividend-paying North American midstream companies have announced reduced payouts for 1Q20, including four C-Corps,” notes Bingham.

Master limited partnerships and midstream companies have been reducing leverage as of late, but what are the benefits of this move? Midstream companies are involved in the gathering, processing, storage, and transportation of oil and gas.

“While the cuts may garner more attention, there have been several midstream C-Corps that have announced flat dividends for the first quarter. C-Corps with a combined weighting in the AMEI Index of 14.7% are maintaining their 1Q20 payouts compared to a weight of 12.6% for C-Corps cutting dividends. When including MLPs, 31.8% of AMEI constituents by weighting are maintaining their dividends compared to 19.3% that have announced cuts,” notes Bingham,