You are at:Home»Alternatives Channel»It Could be Time For This Commodity ETF to Rally 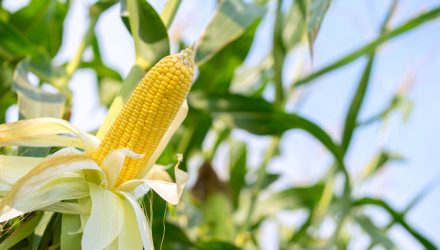 It Could be Time For This Commodity ETF to Rally

Some agriculture commodities have under pressure this year, particularly as the U.S. and China have gone back and forth in what is now a long-running trade war. Down 9.35% year-to-date, the Teucrium Corn Fund (CORN) is an example of a commodities ETF that has been pinched, but CORN could be ready to bounce back.

Earlier this year, Beijing raised levies on agricultural goods, including an added 5% tariff on soybeans and 10% on American pork, along with corn and cotton products, in retaliation to President Donald Trump’s latest plans to hike tariffs on Chinese imports

However, China has since pledged to roll back some of those tariffs and up purchases of U.S. agricultural goods if the U.S. will show a gesture of good faith and reduce tariffs, too.

Corn on the Call

“Now that the 2019 crop year is over in the US, the world’s leading producer and exporter of corn will begin to prepare for the 2020 planting season next March and April,” according to Seeking Alpha. “Each year always presents new challenges for the grain market. Corn tends to hit seasonal lows in December. Early in the year, the uncertainty of the planting, growing, and harvest seasons tends to lift the price of corn futures.”

China is really expected in this trade deal to commit to have to buy a lot of agriculture from the US, and corn is right at the top of the list. Plus, historical data indicate corn prices often bounce back early in the year.

“As the long-term monthly chart illustrates, the price of corn moved higher from the end of the year, each year since late 2013. Since 2012, corn supplies have been sufficient to meet global demand. Meanwhile, price momentum and relative strength on the long-term chart are below neutral readings at the end of 2019,” according to Seeking Alpha.