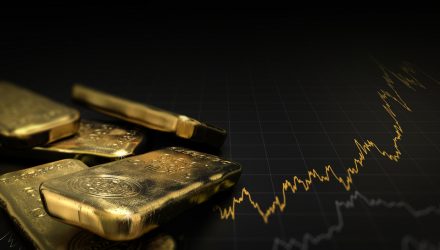 Investors Turn to Gold ETFs as a Hedge Against Inflation

Investors are betting on inflation rising with hedges like gold and related exchange traded funds as central banks and world governments go on a money-printing spree in a bid to restart economies ravaged by the coronavirus pandemic.

For example, the SPDR Gold Shares (NYSEArca: GLD) was among the most popular ETF plays of 2020, capturing $12.2 billion in net inflows so far this year, according to ETFdb data.

Gold, a traditional hedge against inflation, has increased 14% this year as more policymakers enact loose monetary policies, which have further debased their currencies, the Wall Street Journal reports.

A play on gold is a bet that potentially persistent high inflation could erode company profits that struggle to pass on the rising costs to customers. Meanwhile, consumers are left with lower purchasing power if wages don’t keep up with the rise in prices. Consequently, this would produce mixed results for stocks and weigh on inflation-adjusted yields for bonds.

“There’s a whole cauldron of factors that will influence where prices go,” Jane Foley, head of foreign-exchange strategy at Rabobank, told the WSJ, pointing out that there are still trade wars of the last few years to be settled and a push among some politicians to bring more manufacturing home.

However, for now, there is little indication that inflation is a cause for immediate concern, with some indicators suggesting no sudden price surges any time soon.

On the other hand, the gold markets are painting a different picture. Prices have surged since the Federal Reserve launched its aggressive quantitative easing policies in support of the economy. Some hedge funds are already taking bets on increased prices as a result.

“All real assets will benefit from higher inflation, but gold is more than just a real asset, it is the monetary asset of choice,” Diego Parrilla, at Quadriga Asset Managers, told the WSJ. “In the battle of the currencies, gold will win.”