You are at:Home»Alternatives Channel»Investors Have Increasingly Relied on ETFs for Gold Exposure 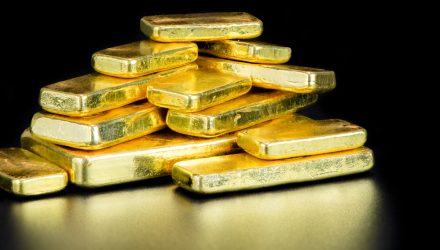 Investors Have Increasingly Relied on ETFs for Gold Exposure

As more investors turn to ETFs to access the markets, gold ETFs have become a go-to choice to easily and quickly gain exposure to the precious metal.

According to DataTrek research, ETF investors have been a key driver of the 18.4% full-year gain in gold prices, even as global demand for the precious metal dipped 1%. The data suggested that the rising prices helped attract investors but pushed out consumers looking for jewelry.

While volatility caused the markets to swing and global downturn concerns pushed investors into safe-haven plays, ETF holdings of physical gold increased 16% to 2,886 tons, or an all-time high.

On the other hand, global central banks, which have been big net buyers of bullion in recent years, were less active last year, buying 0.9% less gold in 2019. However, it was still enough to keep full-year purchases around a decade-long high. Central banks like those in Russia and China have traditional looked to gold as “a way of gaining US dollar exposure (gold is priced in greenbacks globally) without helping the American government fund its ever-growing budget deficit,” Nicholas Colas, DataTrek’s co-founder, told MarketWatch. “Gold is also a hedge against their local currency, of course.”

Meanwhile, consumer purchases of jewelry, bars and coins plunged or basically offset the inflows to ETFs. As prices increased last year to $1,481 per ounce in the fourth quarter, or the highest level since 2013, emerging market consumers who have previously been heavy buyers began to shy away.

“Global ETF demand will continue to drive prices,” Colas added. With the economies of China and India at a standstill and slowing, respectively, “it will be up to financial market investors to pick up the slack of lower jewelry/coin/bar demand. Given macro uncertainty at present (and ever-lower sovereign debt yields), it is reasonable to expect that they will.”