You are at:Home»Alternatives Channel»Investors Are Flocking To This Gold ETF 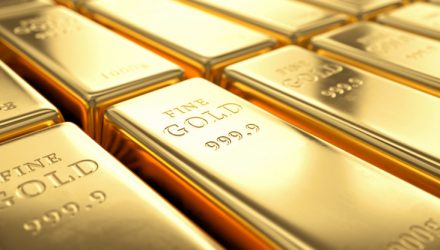 Investors Are Flocking To This Gold ETF

An array of gold-backed ETFs are soaring as investors price in lower interest rates around the world while looking for defensive assets, themes that are boosting the fortunes of the iShares Gold Trust (NYSEARCA: IAU).

“Holdings in BlackRock’s iShares Gold Trust, the second-largest bullion-backed ETF, rose to a record on Friday, even as prices of the metal posted a second straight weekly loss,” reports Bloomberg. “The pile-in came as data showed U.S. payrolls grew at a slower pace in August, fueling haven demand and expectations for monetary easing. Lower rates are a boon for gold, which doesn’t offer a yield.”

Investors are embracing IAU and related ETFs as a quick and easy way to gain exposure to gold price movements as they hedge against market risks, help protect their purchasing power in times of inflationary pressures or capitalize on increasing demand from the emerging markets with a growing middle-income class.

“The Fed will lower rates by a full percentage point between now and January to counter a steep slowdown in the U.S. economy, Deutsche Bank AG economists said in a note Friday,” according to Bloomberg. “A majority of traders and analysts surveyed by Bloomberg remained bullish on the metal, and money managers boosted their net-bullish positioning to a record, according to U.S. government data released on Sept. 6.”

Related: Why Investors Should Look Into Precious Metals ETFs

Others are increasingly bullish on gold.

“We expect spot gold prices to trade stronger for longer, possibly breaching US$2,000 an ounce and posting new cyclical highs at some point in the next year or two,” said Citigroup in a note out Tuesday.