You are at:Home»Alternatives Channel»Here’s What Options Traders Think About a Big Gold Miners ETF 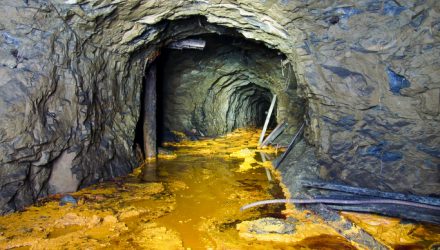 Up more than 33% year-to-date, the VanEck Vectors Gold Miners ETF (GDX) is one of 2019’s best-performing non-leveraged ETFs, but as gold prices have recently stalled, some of the air has come out of the miners trader with GDX trading lower by 2.60% this year month.

GDX is comprised of global gold miners, with a notable tilt toward Canadian and U.S. mining companies. Stock fundamentals like cost deflation across the mining industry, share valuations below the long-term average and rising M&A are all supportive of the miner’s space as well, but those fundamentals could be glossed over if the dollar strengthens.

Recent options data indicate traders have been stepping into GDX options, among the most heavily traded in the ETF space, in a bearish fashion.

“Taking a look at Wednesday’s options activity shows GDX puts crossed at 1.8 times the average daily pace, with around 102,000 contracts traded. The December 23 put was most active, due to two blocks totaling 30,028 contracts that changed hands above the asking price for $0.25 apiece,” according to Schaeffer’s Investment Research.

Some traders believe GDX’s chart is weakening, which could stoke more near-term declines.

“Looking closer at the charts, GDX’s pullback from its early September high stalled out near $27 — a region that contained an early August retreat, and is home to a 38.2% Fibonacci retracement of the fund’s surge from its late-May lows near $20 to that recent peak. Just below here is its rising 80-day trendline, which helped usher GDX higher in the first quarter. Year-to-date, the shares are up 32.7% to trade at $28.01,” according to Schaeffer’s.