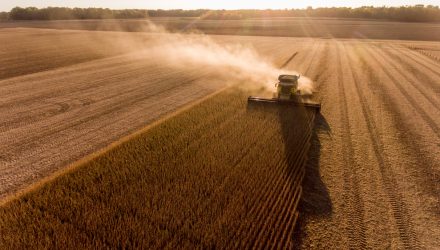 Grains-related exchange traded funds jumped Wednesday after the U.S. Department of Agriculture came out with lower-than-anticipated plantings estimates and inventory.

“We needed higher acres to give us a buffer and it went the wrong way,” Don Roose, president of Iowa-based brokerage U.S. Commodities, told Reuters.

Traders were largely surprised by the USDA’s revelation.

All 26 analysts polled by Reuters believed corn and soy area would hit a new record, with the lowest combined estimate at 181 million acres, Reuters reports. None of the analysts anticipated the possibility for corn or soy area to fall short or be unchanged from March.

“The numbers surprised in beans the most, with planted acreage lower than all surveyed trade estimates, but corn prices surged due to the expected dramatic change in the corn balance sheet and less than optimal July forecasts for the maturing corn crop. Soybeans have more time and a better chance to improve the crop than corn, which is why corn is the focus today,” Sal Gilbert, Teucrium Trading, said.

“There is simply no margin of error for bad weather, and we do have bad weather,” Arlan Suderman, chief commodities economist for broker StoneX, told Reuters.