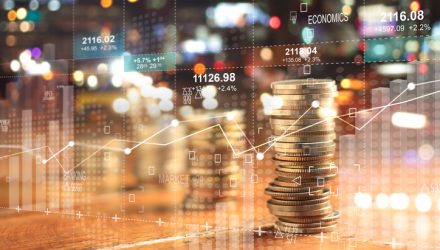 The SPDR Gold Shares (NYSEArca: GLD), the world’s largest gold-backed ETF, is up nearly 17% year-to-date, but one of the most common complaints gold investing lingers: that the yellow metal (and other commodities funds) don’t generate income. Some see that notion as increasingly relevant in a low-interest rate environment.

“Gold, however, doesn’t offer a yield because it has no default risk to compensate its holders, a key rationale for its strong returns historically during negative rate environments,” said George Milling-Stanley, State Street’s chief gold strategist, in a recent note.

Plenty Of Catalysts, Even Without Income

“While some may question if negative interest rates (nominal or real) are an effective tool, it’s becoming harder to ignore the mounting negative debt pool, the growing number of players partaking in the negative yield experiment and the role it may play in redefining the new normal for investors over the next decade,” said milling-Stanley.

Data suggest that the lower interest rates decline, or the more they become negative, the more investors are willing to embrace gold ETFs even though gold ETFs don’t offer interest or coupons. Flows data for gold ETFs in Europe confirm as much.

Notably, since the ECB’s policy move in 2016, European investors have poured in excess of $26 billion into gold-backed ETFs, compared to $13 billion by US investors over the same timeframe,” according to Milling-Stanley.