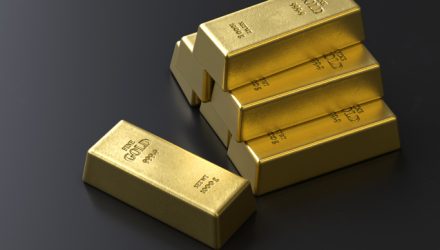 Gold prices and ETFs have pulled back, but some argue that the recent declines may be a good opportunity to increase gold exposure ahead of the U.S. and China trade talks and updates from the Federal Reserve.

Gold ETFs, such as the SPDR Gold Shares (NYSEArca: GLD), have weakened from their six-year highs, with Comex gold futures now hovering around $1,513 per ounce.

The risk-off trade and safe-haven demand for gold have abated on hopes of U.S.-China trade progress and better-than-previously-feared economic data, which have also helped support demand for riskier assets like stocks. However, some analysts remain skeptical that the world’s two largest economies can come to a quick and amicable trade agreement, the Wall Street Journal reports.

A lot can still go wrong and throw a wrench to trade developments. For instance, the U.S. expanded its list of blacklisted Chinese firms and a major Chinese news outlet even speculated that Beijing’s delegation could end talks early. The U.S. and Chinese negotiators are scheduled to meet Thursday.

Expectations of lower interest rates could also help support gold pricing. The Federal Reserve has signaled it will continue cutting interest rates to support economic growth, so observers argued that further rate cuts from the Fed and other global central banks could continue to boost gold bullion.

The Fed will also release minutes on its latest meeting, potentially providing a clearer picture on where officials stand. The minutes could even affect the strength of the U.S. dollar, which has kept pressure on gold in recent weeks.

“We continue to see upside from current levels given the potential for further deterioration in data, Fed easing, and lingering trade uncertainty,” Joni Teves, a strategist at UBS, said in a recent note.