You are at:Home»Alternatives Channel»Gold ETFs Jumped to Record High in September 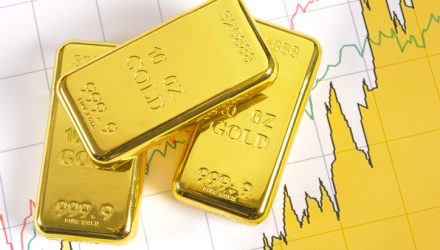 Fresh data from the World Gold Council (WGC) confirm September was a buoyant month for inflows to gold-backed ETFs, including the SPDR Gold Shares (NYSEArca: GLD) and the iShares Gold Trust (NYSEARCA: IAU).

Those two ETFs had combined September inflows of $2.9 billion. Investors are embracing GLD, IAU and related ETFs as a quick and easy way to gain exposure to gold price movements as they hedge against market risks, help protect their purchasing power in times of inflationary pressures or capitalize on increasing demand from the emerging markets with a growing middle-income class.

“In September global gold-backed ETFs and similar products had US$3.9bn of net inflows across all regions, increasing their collective gold holdings by 75.2t to 2,808 tonnes(t), the highest levels of all time,” said the WGC.

“Holdings surpassed late 2012 levels, at which time the gold price was near US$1,700/oz, 18% higher than current levels,” said the WGC. “Notably, the gold-backed ETF landscape is vastly different than in 2012 when two-thirds of global holdings were concentrated in North America. Today, North American- and European-listed funds make up 52% and 44% of global holdings respectively, with the remainder coming from funds listed in Asia and other regions.”

Investors have also been flocking to the  SPDR Gold MiniShares (NYSEArca: GLDM). GLDM, the cost-effective alternative to GLD, recently surpassed $1 billion in assets under management after coming to market in June 2018.

The WGC believes October could be another strong month for gold ETF inflows.

“There are, however, several potential positive catalysts for gold in October. First, global uncertainty continues,” according to the WGC. “The US House of Representatives initiated a preliminary inquiry as to whether to proceed with a formal impeachment investigation of President Trump; a move that could negatively impact risky assets and drive China to potentially delay trade solutions until the 2020 Presidential election. In addition, the deadline for a Brexit decision falls at the end of October, and there is still uncertainty as to whether there will be a ‘No Deal Brexit’ or a deadline extension.”