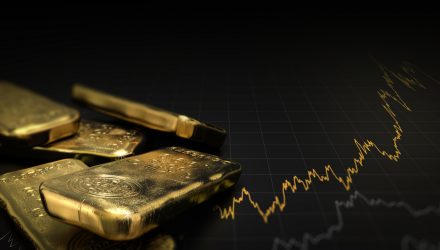 Gold’s traditional use as a safe haven asset was challenged as sellers were scrambling to sell the precious metal in order to offset losses in equities, putting pressure on the likes of GLD and GLDM this month, dealing a blow to gold’s safe-haven status along the way.

With the Federal Reserve slashing interest rates to zero percent, cash might be king, but gold is certainly vying for that crown as a more suitable safe-haven asset. The effects of the coronavirus are no doubt weighing on the minds of investors. Likewise, the central bank responded in tow by bringing rates down to zilch and dumping an epic $700 billion worth into quantitative its easing program.

This isn’t the first time gold’s safe-haven reputation has taken a beating. That happened during the global financial crisis, a scenario that could prove instructive this time around.

“It’s also a scenario that played out in the depths of the 2008 global financial crisis, right before gold started a years-long rally that culminated in the 2011 price record still in place today,” reports Bloomberg.

What’s Next Could be Worth Waiting Around For

The losses for gold come as a drop in the U.S. stock market triggered circuit breakers that temporarily halted trading for the second time this week after stocks tanked. The S&P 500  and Nasdaq Composite are poised to join the Dow Jones Industrial Average in ending an 11-year long bull market.

“Another similarity with 2008 is that, while gold has fallen in recent weeks, the drop has been far outpaced by declines in equity markets and other commodities, so its relative purchasing power has risen, said Matthew McLennan, head of the global value team at First Eagle Investment Management, which manages about $101 billion in assets,” according to Bloomberg.

For gold and ETFs such as GLD and GLDM, the good news is that central banks around the world are debasing currencies, potentially making hard assets more attractive in the process.

“Central banks from the Asia Pacific to Europe have already pledged to spend billions of dollars and implemented new policy steps. The U.S. has drawn up plans for a $2 trillion stimulus, although the process stumbled after Senate Democrats voted to reject the latest version of the legislation,” reports Bloomberg.