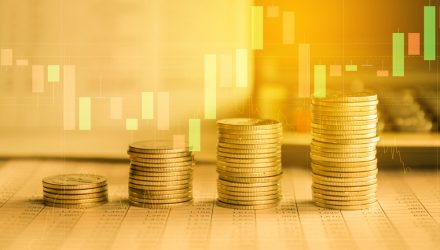 Gold ETFs Are on Breakneck Paces in 2020

For its part, GLD is on such a torrid pace of adding new assets in 2020, it’s topped by just two other ETFs.

“Continuing their growth streak, gold-backed ETFs (gold ETFs) added 154 tonnes (t) – net inflows of US$8.5bn (+4.3%) across all regions in May, boosting global holdings to a new all-time high of 3,510t,” according to the World Gold Council.

WGC previously reported (4 June 2020) that the total tonnage and flows change in global gold ETFs in 2020, was a historical record in both US dollars and tonnage terms. Based on a recent database update, WGC said in a statement that it encountered an aggregation tonnage-change issue related to a few Swiss-based funds with multiple share classes that were launched in late 2008 and early 2009.

“The growth of those funds in 2009 were not accounted for in terms of tonnage change; the overall holdings, however, were correct,” the statement said on Monday. “While the total fund inflows through May 2020 are a record in US dollars, surpassing 2016 levels, the tonnage increase of 623t in the same time period, falls below the adjusted 2009 tonnage change of approximately 646t.”

More data is revealing that they’re putting physical gold on hold and picking up on gold exchange-traded funds (ETFs). Gold ETF inflows are continuing even as the U.S. economy begins to slowly reopen following the pandemic. Other data points confirm traders’ affinity for bullion, GLD, and GLDM.

On an anecdotal level, the assets added by gold ETFs around the world in the first five months of 2020 top any prior year’s record.

Gold bullion has been a traditional safe-guard of wealth and purchasing power in times of high inflation, and the loose monetary policies should devalue the currency. Lower interest rates are helping gold’s cause, too. Depressed interest rates diminish the opportunity cost of holding non-yield-generating assets, like gold.

“Positive flows combined with a rising gold price also pushed assets under management (AUM) in gold ETFs to new record highs of US$195bn, even as stock and bond prices increased,” said the WGC. “Global gold ETFs had inflows in all but two trading days during April and May (41 of 43 days). The only other historical period with similarly consistent inflows occurred in May and June of 2016, when funds experienced inflows in all but four trading days.”

North America remains a titan in the gold ETF market, but other regions are contributing to this year’s flows.

Investors are also embracing low-cost gold ETFs as GLDM and the GraniteShares Gold Trust (BAR) combine for more than $1.6 billion in year-to-date flows.