You are at:Home»Alternatives Channel»A Gasoline ETF Is Trading Around Record Highs 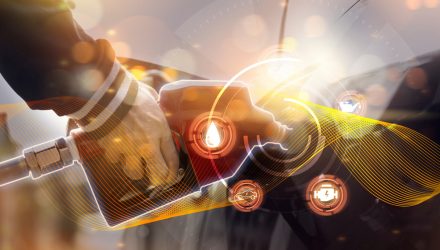 A Gasoline ETF Is Trading Around Record Highs

Gasoline commodity-related exchange traded fund slipped Tuesday after hitting a record high this week, with gas pump prices crossing above $4 per gallon across the United States for the first time ever.

Meanwhile, Nymex RBOB gasoline futures were 2.6% lower to $3.92 per gallon.

According to auto club AAA, U.S. gasoline prices at the pump stations have for the first time crossed above $4 per gallon all across America, Bloomberg reports.

In California, the most expensive state, prices are averaging a record high $6.021 per gallon, and five other states are seeing average prices above $5 per gallon as well.

The elevated gas pump prices, with less than two weeks before the traditional beginning of peak summer driving, will be a burden to consumers and a challenge for U.S. President Joe Biden, especially in a contested midterm election season ahead.

“We are approaching one of the busiest demand weeks of the year with tight supplies in many US markets and much tighter supplies elsewhere around the world,” analysts at fuel distributor TACenergy wrote in a note on Monday.

So far, the Biden administration’s attempts to release crude oil from emergency reserves have not helped consumers at the pump, partially due to a dearth of refining capacity to process that raw crude oil.

Ellen Edmonds, a spokesperson for AAA, warned that it is too early to tell how Americans will adjust summer travel plans in light of the higher pump prices as people still take planned trips and could find other ways to offset prices.

Additionally, Mark Finley, a fellow a Rice University’s Baker Institute for Public Policy, argued that the burden of high prices will most heavily affect lower-income families who spend a bigger chunk of income on fuel, and they are also less likely to switch to electric vehicles.