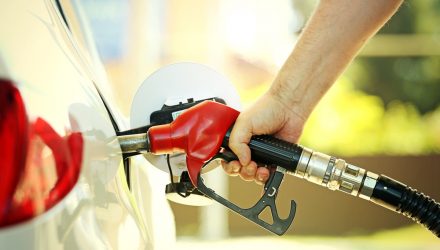 Gasoline ETF Is Pumped as Americans Step Outside Again

As states begin to roll back shutdown restrictions and more Americans go out for some fresh air, gasoline futures and related exchange traded fund has surged.

The United States Gasoline Fund (NYSEArca: UGA) increased 18.7% over the past week and advanced 30.1% over the past month, as RBOB gasoline futures now trading around $0.9522 per gallon compared to $0.6780 a month ago.

More Americans have hit the road to get their daily grocery shopping and even visit the beaches and parks after being cooped up for a month, increasing the demand for gasoline.

“People have been cooped up, they want to drive,” Phillips 66 Chief Executive Greg Garland told investors recently, according to the Wall Street Journal.

According to an analysis of TomTom GPS data by RBC Capital Markets, traffic in areas like Dallas, Houston, and Atlanta where lockdown orders have eased is increasing slightly, CNN reports. Congestion in New York City has even picked up in recent weeks, with NYC traffic rebounding to 88% below normal from 96% below normal in mid-April.

“Demand in the US has bottomed out,” Michael Tran, RBC’s director of global energy strategy, told CNN, pointing to a combination of relaxing rules in states such as Georgia and Texas, warmer weather and “cabin fever” as the major drivers behind the increases.

Consequently, the increased traffic has translated to higher gas demand. According to GasBuddy, gasoline demand in the United States jumped on Wednesday to the highest level for that day of the week since March 18, with gas demand up 16% from its March 25 low. However, it remains 31% below March 11 when stay at home orders started to take effect.

Simmons projects gasoline demand to return eventually to around pre-Covid-19 levels, arguing that some people will drive over public transportation due to lingering concern over coronavirus transmission in crowded settings, which may help offset those who continue to work from home.

The stunted supply has also helped prop up gasoline markets. Refiners sharply cut production in March and April to about two-thirds capacity as the economy came to a halt. Energy Information Administration data shows the level is down from about 90% year-over-year.