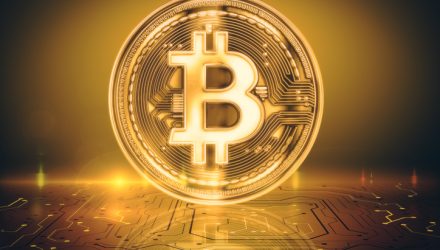 Although the Securities and Exchange Commission (SEC) has continually rebuffed overtures by ETF issuers to launch bitcoin ETFs, fund managers aren’t giving up on the idea. Kryptoin Investment Advisors is the latest firm to file plans for a bitcoin ETF.

That firm has some interesting ETF DNA as its head of ETF product, Jason Toussaint, was formerly at the World Gold Council (WGC) and was involved with the SPDR Gold Shares (NYSEArca: GLD), the world’s largest gold-backed ETF.

“The company plans to hold Bitcoin and value the shares of the trust according to the Chicago Mercantile Exchange Bitcoin Reference Rate. The cryptocurrency will be held at an unspecified third-party insured custodian that is also regulated under the Investment Advisers Act of 1940,” reports CoinTelegraph.

Bitwise Asset Management’s Bitcoin ETF was disapproved earlier this month, but Bitwise remains optimistic that the remaining concerns and challenges raised in the Security and Exchange Commission’s order will ultimately be satisfied. Additionally, other issuers have withdrawn bitcoin ETF applications while the SEC has rejected others.

The Kryptoin filing mentions the trust will hold bitcoin“in seeking to ensure that the price of the Trust’s shares is reflective of the actual bitcoin market.”

That appears to be an avenue for attempting to allay some of the SEC’s previously mentioned concerns that a massive percentage, by some estimates 95%, of quoted bitcoin prices are phony and that just 5% of price action in the market is credible.

“Instead, when it sells or redeems its Shares, it will do so in ‘in-kind’ transactions in blocks of 100,000 Shares called ‘Baskets’ at the Trust’s net asset value (‘NAV’). Only Authorized Purchasers may purchase or redeem Shares with the Trust, and they will do so by delivering bitcoin to the Trust in exchange for Shares when they purchase Shares,” according to Kryptoin’s SEC filing.

Various firms like VanEck have tried to push through a Bitcoin ETF, but the SEC cited issues, such as price manipulation as a primary obstacle in getting a cryptocurrency-related fund approved.