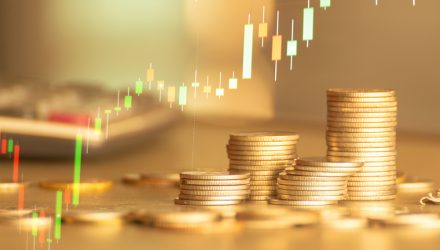 Precious metals like gold offer investors an alternative to diversify their holdings, and like other commodities, gold will march to the beat of its own drum compared to the broader market.

“Gold for delivery in August, the most active contract on the Comex market in New York, touched a high of $1,779 an ounce, the highest since February 2012,” reports Mining.com. “The World Gold Council reported that Friday saw a massive 27.3 tonnes (974,000 ounces worth more than $1.7 billion at today’s prices) inflow into gold-backed ETFs.”

Gold-backed ETFs attracted large inflows over the first quarter. The large inflows came at the expense of a sharp decline in gold jewelry demand over the first three months of the year. Central banks continued to buy gold, albeit at a slower pace. Additionally, gains in a developed market bar and coin demand helped offset weakness in Asia.

“According to a note from BMO Capital Markets, Friday’s haul takes a month to date inflows to 55.6 tonnes (1.96m ounces), with the vast majority of this coming from North America,” according to Mining.com. “Gold prices have rallied over 16% so far this year, supported by the rolling out of massive monetary stimulus from central banks around the world in response to the economic fallout of the covid-19 pandemic.”

If inflation materializes, that is likely to be another catalyst for GLD and GLDM.

“Additional monetary stimulus to combat the pandemic, including the Bank of England’s bond-buying program announced last week, could lend further support to bullion as a hedge against inflation,” reports Mining.com.