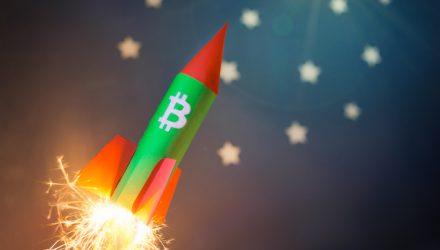 The Federal Reserve meets later this week with many market observers expecting another rate cut of 25 basis points. That move would likely provide a short-term assist to an array of asset classes, including bitcoin.

At this writing midday Monday, bitcoin prices were lower by 1.33% at around $10,201. Recently, the leading cryptocurrency has been exhibiting signs of less volatility, which counters the market oscillations that investors have been experiencing in the equities markets. These steady market movements could help spur more crypto funds in the future.

“The Fed looks likely to follow the European Central Bank and cut rates this week by perhaps a quarter of a percentage point. This comes after it slashed interest rates for the first time in a decade in July on U.S.-China trade war tensions,” said deVere Group CEO Nigel Green in a Monday note. “Bitcoin, the world’s largest cryptocurrency by market cap, is likely to break out of its recent sideways trading pattern and be given a healthy boost by the Fed’s rate cut.”

Still, it’s hard to shake off the fact that the cryptocurrency has been here before. After rallying to a high of roughly $20,000 in 2017, based on investors jumping on the bandwagon and trying to get rich quickly, the bubble finally burst, sinking the cryptocurrency to less than $4000 within just a year’s time. Since the bitcoin boom in 2017, the world’s largest cryptocurrency has dropped more than 60% from its high.

If the price regains its footing within the $10,000 range again, it could bring more interest in the form of crypto funds. Investors who are hesitant to jump into crypto assets may see the lower price volatility as a more favorable option to equities.

Still, there’s a good case for bitcoin rallying if the Fed cuts rates this week.

“This is because an interest rate cut reduces the incentive to keep the fiat currency. In addition, rate cuts typically lead to higher inflation, which reduces the purchasing power of traditional currencies,” said deVere’s Green. “As such, Bitcoin, and other decentralized cryptocurrencies, become more attractive and the price will adjust upwards accordingly.”