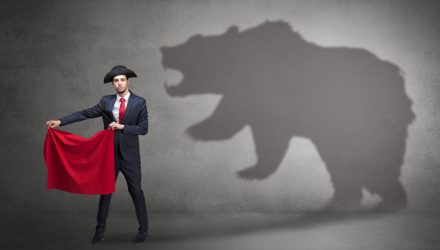 Fade The Fed With This Bearish ETF

The Federal Reserve is rushing to shore up various areas of the fixed income market, an effort that started with investment-grade corporate bonds and was later expanded to mortgage-backed securities and municipal bonds.

That plan also includes high-yield debt via the iShares iBoxx High Yield Corporate Bond ETF (HYG) and related ETFs. Fed buying of HYG would appear to be enough to keep short-sellers, but data suggest the opposite is true and that could open the door to tactical opportunities with the ProShares Short High Yield (NYSEArca: SJB).

SJB “seeks a return that is -1x the return of its underlying benchmark (target) for a single day, as measured from one NAV calculation to the next. Due to the compounding of daily returns, ProShares’ returns over periods other than one day will likely differ in amount and possibly direction from the target return for the same period,” according to ProShares. “These effects may be more pronounced in funds with larger or inverse multiples and in funds with volatile benchmarks. Investors should monitor their holdings as frequently as daily.”

“Short interest on the $16.3 billion iShares iBoxx High Yield Corporate Bond exchange-traded fund — a rough indicator of bearish bets — is near 38% of shares outstanding, according to data from IHS Markit Ltd,” reports Bloomberg. “That’s close to a record of 39% reached in late February for the fund, which uses the ticker HYG.”

HYG tracks the investment results of the Markit iBoxx® USD Liquid High Yield Index, which is comprised of high yield U.S. corporate bonds that have less than investment-grade quality. SJB attempts to deliver the daily inverse performance of that benchmark.

“Skepticism is returning after last week saw the biggest rally on record for the ETF, which soared on the back of the Fed’s plan to buy corporate bonds recently cut to junk, known as fallen angels, and certain high-yield funds,” according to Bloomberg.

Weakness in junk bonds comes right after a record borrowing binge in recent years as many companies looked at the relatively low-rate environment as a cheap opportunity to borrow, with more investors willing to chase after speculative-grade debt for their more attractive yields. Regulators and economists have warned that the debt market for high-risk companies may have become overstretched since the financial crisis of 2008.

That scenario coupled with rising defaults could bolster the near-term case for SJB. The ProShares fund is lower by 8.55% over the past week, indicating it’s being hurt by the Fed news, but as the data above indicate, traders are willing to bet the Fed ebullience won’t last long in the high-yield market.