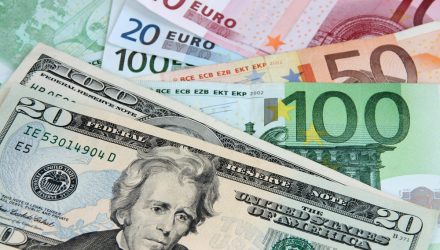 The Russia-Ukraine war has weighed especially hard on neighboring European assets, bolstering the appeal for the U.S. dollar and related exchange traded funds against their euro counterpart.

The greenback has made a quick turnaround from previous bets against pricey U.S. assets as heightened geopolitical risks from the Russia-Ukraine war weighed on the European growth outlook.

Investors have turned to the greenback, with The U.S. Dollar Currency Index up 3% year-to-date to its highest level in 21 months, partially due to investors seeking shelter from market volatility.

Looking ahead, the play may still have legs, depending on the monetary policies that either the Federal Reserve or the European Central Bank adopts. Many market observers already anticipate the Fed to hike interest rates this year to clamp down on inflationary pressures, but the ECB is also facing its own difficulties in wrangling a surge in raw materials prices in response to the threat to Europe’s energy-dependent economy.

Traders are also betting on a widening gap in yields between the U.S. and Eurozone, which have helped push the euro towards its lowest level against the dollar in over two years.

“The view at the start of the year that the euro would appreciate after a couple of months of dollar strength has taken a bit of a setback,” Bipan Rai, North American head of FX strategy at CIBC Capital Markets, told Reuters.