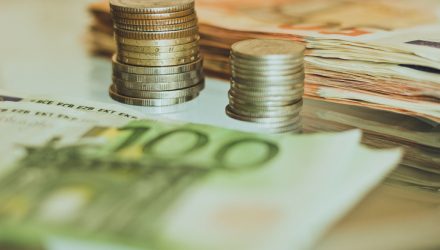 Euro ETF Could Sag Some More

The Invesco CurrencyShares Euro Currency Trust (NYSEArca: FXE) is off nearly 2% year-to-date and some foreign currency market observers see more downside ahead for the common currency.

Recently, European Central Bank (ECB) President Mario Draghi indicated the ECB will keep an easy monetary policy in place longer than many investors expected. That could be all the motivation forex traders need to hammer the euro.

“The same day that Draghi hinted at a possible eurozone rate cut (unfairly or not, depending upon your portfolio allocation), FXE sank to a new low for the month of June — the lowest intraday level since its June 3 opening bull gap,” according to Schaeffer’s Investment Research.

Looking ahead, new data may continue to drag on the Eurozone currency. For instance, the Commerce Department recently revealed a strong first quarter U.S. economic expansion, which should help reassure investors about the growth trajectory in the U.S. and further help prop up demand for greenbacks.

But since that immediate post-Draghi slide in shares of the exchange-traded fund (ETF), FXE has snapped back quickly — and even taken out resistance at its 160-day moving average in the process, which it’s now re-testing as support. (For longer-term chart watchers, this daily trendline roughly corresponds with the 32-week moving average), according to Schaeffer’s.

Additionally, some warn that political risks like the prolonged Brexit and the coming European Union elections could further add to uncertainty over the euro.

Draghi said ECB policy makers would consider in the weeks ahead how to adapt their policy tools “commensurate to the severity of the risk” to the economic outlook, which leaves open the option to extend the time frame before the next interest-rate increase, a reduction in the already negative policy rate or restarting bond purchases. Still, historical data indicate FXE could be a decent performer this month.

FXE “averages a return of 0.71% for July, placing the calendar period behind only April (1.07%) and June (0.74%) in terms of monthly performance. That’s based on the last 10 years’ worth of data, during which FXE has ended July higher on six occasions,” notes Schaeffer’s.