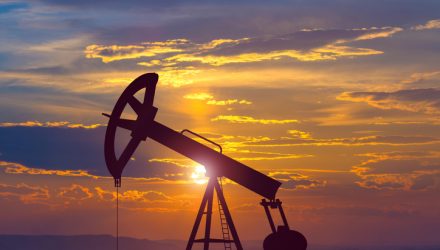 The energy market and sector-related ETFs rallied on Friday as crude oil prices spiked on fears of retaliatory attacks from Iran on the Middle Eastern energy infrastructure in response to a U.S. airstrike that killed a high ranking Iranian military official.

Iran promised retaliatory action in response to the death of Major-General Qassem Soleimani, architect of Iran’s spreading military influence in the Middle East. Tehran’s response could stall waterborne shipments from the Persian Gulf, including from Saudi Arabia, the Wall Street Journal reports. The pressure would affect roughly a third of the world’s shipped oil that goes through the Strait of Hormuz where tankers have been previously attacked and seized.

“The rhetoric is one of severe retaliation from Iran, and I’m expecting the market to drift higher as tensions continue to rise,” Edward Marshall, a commodities trader at investment firm Global Risk Management, told the WSJ.

Analysts warned that given the history of attacks on U.S.-backed allies, such as the one on Saudi Arabia’s facilities in September, Iran might respond to the U.S. airstrike by focusing on regional energy infrastructure.

“In terms of what this means for Saudi Arabia, they’ll be extremely nervous today. They’d love to have Iran confronted but they won’t want to be on the front line,” Charles Hollis, a former U.K. diplomat to Saudi Arabia and Iran, and managing director of geopolitical risk consulting firm Falanx Assynt, told the WSJ.

“[For Iran], to attack a proxy nation after a direct attack from the U.S. is an easy option, but I’m almost certain the U.S. will have reinforced defenses there,” Hollis added.