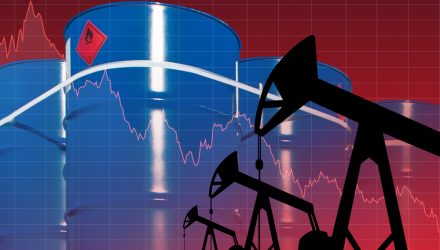 Oil exchange traded funds plunged on Tuesday, with crude prices trading below $100 and hitting their lowest levels in almost three weeks, as supply fears waned and a spike in COVID-19 cases across China fueled demand concerns.

The declines on Tuesday followed comments from the Russian Foreign Minister Sergei Lavrov, who said that Moscow could back the 2015 Iran nuclear deal, adding to bets that Iran could find a way to enter global oil markets again, Reuters reports. A revived nuclear deal would remove the sanctions on Iran’s oil sector and allow the country to resume exports. The deal was previously stalled due to Russian demands to link the deal to its own Western sanctions implemented in response to the Russia-Ukraine war.

Meanwhile, Russian oil continues to hit international markets, with China and India picking up Russian crude exports at a steep discount due to the depreciating ruble currency.

Ukrainian negotiators on Tuesday also said that talks with Russia over a potential ceasefire and withdrawal of troops are ongoing.

“Whilst reports of promising talks (between Russia and Ukraine) are to be welcomed, it is hard to see how either side at this stage would be prepared to make concessions that would be acceptable to any party,” Kpler said in a research note. “In this current situation, it is hard to see how crude oil prices are not being under-priced.”

Further weighing on crude oil markets, China recorded a spike in daily COVID-19 infection rates, fueling concerns of a demand hit from another round of lockdown measures across the country. China’s daily oil processing rate already dipped 1.1% over the first two months of 2022 year-over-year to the lowest level since December 2020.

The Federal Reserve is also preparing to hike interest rates for the first time in four years to clamp down on the surging inflation, which could bolster the U.S. dollar and weigh on demand for USD-denominated oil.