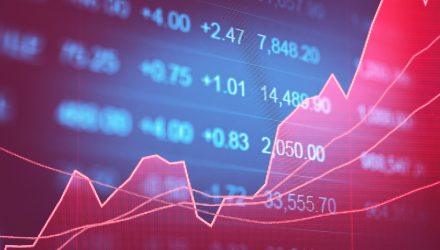 Energy ETFs Could Continue to Outperform

High crude oil prices aren’t going to let up anytime soon, with oil futures signaling elevated pricing for the summer. Investors can capture the strength in the energy markets with exchange traded funds.

Meanwhile, inventories in Cushing, Oklahoma, the delivery point for benchmark U.S. West Texas Intermediate crude oil futures, are at their lowest for this period of the year since 2008 when crude oil was trading above $100 per barrel.

While the lower oil stockpiles might be partially attributed to refiners halting operations for routine maintenance work, the drawdowns are projected to continue into the peak summer traveling demand months.

Crude oil and energy markets jumped again on Wednesday after NATO warned that Russia did not appear to be withdrawing its troops from Ukraine’s borders like Moscow said it would. Without evidence that Russia is pulling back troops, the previous mindset that cooled off energy markets on Tuesday reversed on Wednesday with a potential for escalation, Rebecca Babin, senior energy trader at CIBC Private Wealth Management, told Bloomberg.

Further fueling the bullish tone, inventories at the biggest U.S. crude storage hub dipped to their lowest level since September 2018, according to the Energy Information Administration. Meanwhile, the four-week average for deliveries of oil products from primary storage, an indicator for demand, was at the highest for weekly data going back to 1990.