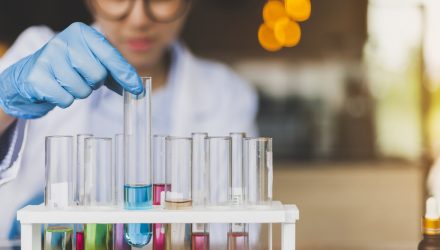 Healthcare is one of the most politically sensitive sectors and that sensitivity is on full display in recent weeks with biotechnology ETFs, including the First Trust NYSE Arca Biotechnology Index Fund (NYSEArca: FBT).

“However, since peaking on July 20th, the NYSE Arca Biotechnology Index has declined by 12.7%, while the S&P 500 Index has advanced by 8.7% (through 9/1/20),” said First Trust Senior Vice President Ryan Issakanien in a recent note.

FBT is also worth considering if the U.S. economy takes a while to rebound from the pandemic. SVB Leerink analyst Geoffrey Porges recently pointed out in a note to clients that biotechnology and pharmaceutical benchmarks topped the broader market during the 2001 recession, the global financial crisis, and during the current economic malaise.

“While there are many possible explanations for biotech’s recent underperformance, I believe one important factor is the upcoming presidential election. Rising health care costs in the U.S. have been a go-to wedge issue for Democratic party candidates in election campaigns, especially over the past two decades (the Affordable Care Act passed in 2010). But if history repeats, this pullback may represent an attractive buying opportunity.”

Of course, there’s plenty of election year conjecture to deal with, but biotech stocks usually emerge from presidential politics in strong for, with historical data confirming as much.