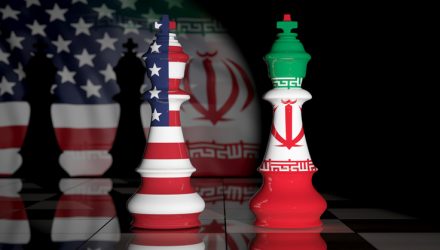 Tehran’s response could stall waterborne shipments from the Persian Gulf, including from Saudi Arabia, the Wall Street Journal reports. The pressure would affect roughly a third of the world’s shipped oil that goes through the Strait of Hormuz where tankers have been previously attacked and seized.

In traditional fashion, the Iranian government claimed it will retaliate for the death of Soleimani, who was in Baghdad, Iraq, when he was killed, prompting the U.S. State Department to admonish American citizens to leave Iraq.

“In the options pits, nearly 129,000 calls have changed hands — six times what’s typically seen at this point, and quadruple the number of puts on the tape,” according to Schaeffer’s Investment Research. “The weekly 1/10 and January 2020 13.50-strike calls are most active, and it looks like new positions are being purchased. In this case, call buyers are betting on USO breaking out above $13.50 over the next two weeks.”

With its close at $13.18 last Friday, USO is flirting with some levels it hasn’t seen in a while.

“Options traders have already been targeting the front-month 13.50 strike, which is currently home to 25,321 calls outstanding. The January 2020 13-strike call is home to peak call open interest on USO, where nearly 53,000 contracts reside,” according to Schaeffer’s.

Iran could opt for attacks on the Strait of Hormuz, a major global oil thoroughfare, a move that would likely send crude prices higher and USO along for the ride.

As of Friday, Jan. 3, USO, one of the most heavily traded commodities ETFs, is on a five-week winning streak.