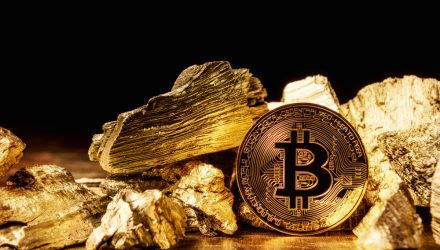 Bitcoin, the largest digital currency by market value, is on a torrid pace this year, prompting some investors to rue missing out on an incredible run. If a Citi report is even somewhat accurate, there’s still plenty of upside to be had with the cryptocurrency.

In a report calling bitcoin “gold of the 21st century,” CitiBank MD, and former FX technician, Tom Fitzpatrick, reveals an uber-bullish target in which the digital asset could vault to $318,000 in just over a year.

One of the most often cited knocks against bitcoin is that digital assets are volatile. While the largest cryptocurrency has had its bouts with turbulence, some investors may be surprised to learn bitcoin actually has some favorable volatility statistics.

“Bitcoin move happened in the aftermath of the Great Financial crisis (of 2008) which saw a new change in the monetary regime as we went to ZERO percent interest rates,” according to Citi.

There are catalysts for increased Bitcoin adoption. Millennials, the rise of China, demand for privacy, rising interest for alternative investments, and headwinds among traditional assets are significant factors that will continue to fuel demand for cryptocurrencies.

“Currently, the COVID-19 crisis and the government’s associated monetary and fiscal response are creating a similar market environment as gold in the 1970s. Governments have made it clear that they will not shy away from unprecedented money printing until the GDP and employment numbers are back up,” reports Investing.com.

“You look at price action being much more symmetrical or so over the past seven years forming what looks like a very well defined channel giving us an up move of similar timeframe to the last rally (in 2017),” notes Citi’s Fitzpatrick.

Bitcoin has sometimes been referred to as “digital gold” with supporters suggesting it could be a good safe-haven investment. However, the cryptocurrency has tended to trade closer to equity markets in recent times and has been plagued by massive volatility, which has either made investors fortunes or crushed them.

“Therefore, in all likelihood, the targets for BTC might seem exaggerated to traditional investors. Nevertheless, the principle theory of a paradigm shift in the global currency market is not new. Economist Ray Dalio has hinted at the debasement of the dollar and a paradigm shift as well,” according to Investing.com.