You are at:Home»Alternatives Channel»Crude Carnage Unearths the Right Choice Among Oil ETFs 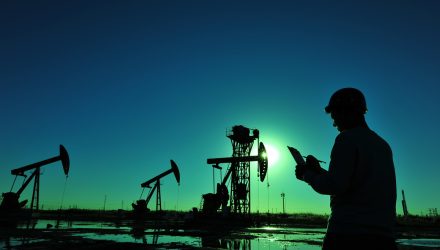 Ongoing carnage in the oil patch is showing investors which exchange traded products offering exposure to this commodity can be trusted and which cannot.

As West Texas Intermediate (WTI) futures slipped to $13 a barrel on Monday, the United States Oil Fund (NYSEArca: USO) tumbled nearly 15%. USO, one the most heavily traded commodities ETPs, was originally designed to track front month WTI futures, but as oil has been drubbed, USO’s investment objective is shifting on an almost daily basis, rolling further and further out the futures curve.

Though it hasn’t been immune to oil declines and volatility, the Invesco DB Oil Fund (DBO) is at least sticking to its stated objective.

Funds like USO used to give high sensitivity in the short term to daily moves and price curves. If the view is that crude oil will move in one direction or another for the next 8-12 months, DBO allows investors to look at that, and they can see how a futures contract will hold, before making new calculations.

“Common sense would dictate that a rational seller in the market would not agree to pay another to take a commodity of value unless the seller unexpectedly found themselves in situational duress,” said Invesco Global ETF Strategist Jason Bloom in a recent note. “We say unexpectedly because if a rational seller could anticipate duress that would cause a significant loss, they would most likely take steps to avoid the duress.”

DBO tracks the DBIQ Optimum Yield Crude Oil Index Excess Return, a benchmark comprised of WTI futures contracts. That makes DBO an index-based product. Conversely, USO is based on futures and the difference provides a glaring chasm in performance. USO is lower by almost 83% this year while DBO is down 51%.

Beyond that obvious point, there are several reasons why DBO, not USO, should be investors’ preferred option if they’re looking to position for a crude rebound.

“First, in most instances, the further one positions out the futures curve, the less sensitive their position to short-term movements in the spot price of crude oil. Second, the steeper the slope of the curve along which the investor is rolling the futures, the greater the magnitude of the roll yield (whether positive or negative),” said Bloom. “As of April 22nd, selling the front month June WTI futures at $14.46 and buying the July WTI futures contract at $21.00 would cost the investor over $6 per barrel. At current price levels, negative roll-yield in the first two months on the WTI futures curve will cost the investor more than 45% of their investment in less than 30 days. OUCH! One way an investor can minimize the cost of contango is to optimize the futures roll by selecting a contract positioned on a “flatter” portion of the curve, thereby reducing the negative roll-yield. It is this flatter part of the curve where Invesco’s WTI focused ETF (DBO) is currently positioned.”