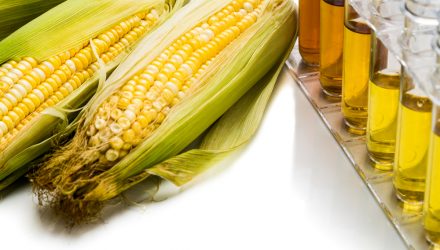 A corn exchange traded fund could continue to find support as President Joe Biden temporarily lifts the limit of ethanol blended into gasoline to help ease the country’s burden of rising energy prices.

The Biden administration argued that lifting the use of gasoline with 15% ethanol, or E15, over the summer months could help lower consumers’ gas costs, which have surged as Russia’s invasion of Ukraine and Western sanctions have disrupted normal supply lines, the Wall Street Journal reports. Agriculture industry executives and analysts see the decision as a win for corn growers and ethanol-producing companies.

“You’re not going to show up at your local gas station and see a bag over the pump that has the cheapest gas, you’re going to be able to keep filling up with E15,” Biden said during a visit to a Poet ethanol plant in Menlo, Iowa, adding that the move would support farmers and the farm economy while lowering prices at the gas pumps.

Ethanol previously comprised up to 10% of the U.S. fuel supply. The Biden administration’s decision would allow gasoline companies to include a 15% ethanol mix to be sold from June 1 through September 15. The federal government has limited ethanol blends to 10% during the height of travel over the summer months to decrease smog from the 15% blend’s higher volatility.

According to the Renewable Fuels Association, a trade group that represents ethanol producers and some corn grower groups, the elevated E15 consumption is projected to rise by about 300 million gallons over 2022, compared to the 814 million gallons of E15 sold for all of 2021. The U.S. Energy Information Administration calculated that over 15 billion gallons of ethanol were produced in 2021 as well.

Meanwhile, the higher demand for corn for producing ethanol in the upcoming months could keep corn prices elevated through the year.

“Further and artificial demand for corn created by this administration will likely increase the cost of corn and all food products dependent on corn and corn oil inputs,” Mike Brown, president of the group, told the WSJ.