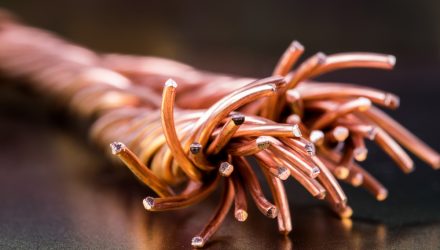 Copper Gets Its Turn in Metals Spotlight

Gold is getting all the attention in the metals arena this year and rightfully so, but there are encouraging signs for the copper exchange traded products, such as the iShares MSCI Chile ETF (NYSEArca: ECH) and the iPath Series B Bloomberg Copper Subindex Total Return ETN (NYSEArca: JJC).

Crimped supply could support prices for awhile. Some analysts are growing concerned that global troubles could drag down the industrial metal as well. Along with the trade concerns, copper prices were weakening on softening global economic data. The base metal is a significant component in many industries, including construction, and is widely seen as a barometer for global economic health.

“Copper futures prices remained within shouting distance of the $3 a pound level on Tuesday on the back of a surge in Chinese imports of the metal and worries about supply from South America,” reports Frik Els for Mining.com. “Copper for delivery in September trading in New York changed hands for $2.9460 a pound ($6,495 a tonne) in early afternoon trade, easing back from yesterday’s close at a two year high.”

Data indicate some professional traders are growing bullish on the red metal.

“Commodity Futures Trading Commission data show hedge fund positioning in the copper market at its most bullish in two years,” according to Mining.com. “Large-scale speculators like hedge funds have built long positions (bets that copper will trade at a higher level in the future) to pre-pandemic levels and at the same time cut shorts (bets that copper can be bought back at a lower price in the future).”