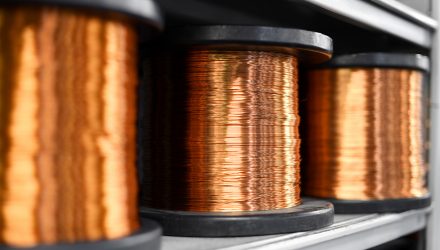 Amid the fretting capital markets following an escalation of the U.S.-China trade war, copper exchange-traded products (ETPs) took a hit, which doesn’t bode well since the metal is seen a barometer of economic health. The iPath Series B Bloomberg Copper Subindex Total Return ETN (NYSEArca: JJC) is down 4.85 percent the last five days and the United States Copper Index Fund, LP (NYSEArca: CPER) is also down 5 percent.

Copper futures hit a bottom-barrel two-year low on Monday as chaos was ensuing in equities, which was evidenced by the fall in Dow Jones Industrial Average of over 950 points—the largest decline of 2019.  Due to copper’s widespread use, particularly when it comes to homebuilding and commercial construction, it’s a good measuring stick of how well the economy is doing.

Adding to the trade wars is a Federal Reserve that is hesitant to implement a series of interest rate cuts the markets are clamoring for.

“The combination of a disappointing Fed and an escalating trade war appears to be too much for this fragile global economy. The summer breakdown in copper suggests that volatility will remain a major theme in the markets in H2′19, and the odds of a recession are steadily rising,” said The Steven Report’s Tom Essaye.

According to Essaye, copper’s decline is “by far the most important development” and that “markets were clearly too optimistic given the multiple risks in the macro backdrop.”

The markets weren’t helped by global investment firm Morgan Stanley who said that a recession could hit in just three quarters if the U.S.-China trade war escalates further.

“What China represents is a major deflationary force, not only for world growth but for Dr. Copper and commodities in general,” said Marc Chandler, chief market strategist at Bannockburn Global Forex.

Bannockburn Global Forex also said that if current stimulus measures in China can’t stem the tide of tariffs, then copper could experience a glut. That, of course, would depress copper prices even further.