You are at:Home»Alternative ETFs»For Copper ETN, It’s All About The Trade War 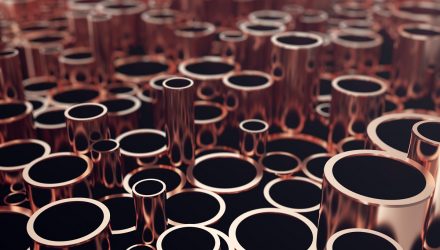 For Copper ETN, It’s All About The Trade War

The ongoing trade spat between the U.S. and China is claiming plenty of victims in the commodities complex. That includes copper, the most widely followed industrial metal. Just look at the iPath Series B Bloomberg Copper Subindex Total Return ETN (NYSEArca: JJC), which is lower by 6.53% this month.

However, another trade flap is seen impacting the red metal over the near-term.

“Here’s a sign of how all-dominating the trade war has become in metals markets: Copper is slumping toward a three-month low even after Zambia moved closer to nationalizing some of its mines,” reports Bloomberg. “Zambian President Edgar Lungu is escalating a spat with miners including Vedanta Resources Ltd. and Glencore Plc over the share of royalties the country collects from the extraction of its vast reserves of copper. On Monday, the government filed notification of plans to take over Vedanta’s domestic copper assets.”

“Nationalizing the assets raises the risk of possible disruptions in an already tight copper market, according to Colin Hamilton, the managing director for commodities research at BMO Capital Markets,” reports Bloomberg. “Given some historic U-turns on Zambia’s mining policy in recent years, investors may also be pricing in the possibility that the government will step back from the brink and strike a deal with miners, he said.”

ETF investors can also gain exposure to the metals and mining space through miner-related ETFs, such as the SPDR Metals & Mining ETF (NYSEArca: XME), which is designed to track the broad metals and mining segment, and the Global X Copper Miners ETF (NYSEARCA: COPX), which takes a more focused approach to copper miners.