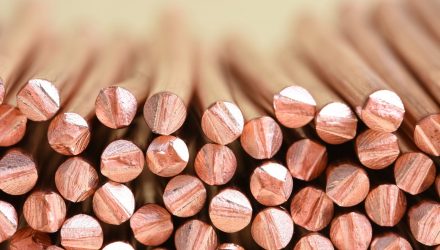 Copper ETFs Are Rallying on an Improving China Outlook

Copper exchange traded notes pulled back from their highest level since May after Chinese industrial companies revealed profits expanded at their fastest pace in eight months, lifting the outlook for metals demand.

“(There’s) broader optimism on copper building over the last few months,” a senior trader told Reuters, adding the Chinese data added to the market’s buoyancy. “A simmering down in trade tensions should be good for the world economy but a full and final settlement doesn’t look imminent.”

Upbeat economic data from China helped bolster the outlook for metals demand as the emerging Asian economy makes up about half of global consumption. According to China’s National Bureau of Statistics on Friday, combined profits at industrial enterprises rose 5.4% in November year-over-year, compared to the year-on-year pullback of 9.9% back in October, the South China Morning Post reports.

Profits at private industrial enterprises also surged 14.7%, revealing a good boost for the industrial segment as the government provides more support to the economy.

“Production of raw materials and equipment has accelerated in the fourth quarter after Beijing sent a clear message about stabilizing growth, which led to a noticeable increase in industrial value output,” Li Chao, chief economist at Huatai Securities, wrote in a note that industrial profitability would be stable in 2020. “There’s no need to be pessimistic about profitability in 2020.”

Additionally, many believe that the initial trade deal between the United States and China will diminish uncertainty going forward.

“If the phase one deal is inked, private investors will be more confident and investment will bottom out. Next year will be no worse than this year, and GDP growth could be around 6 percent or a little bit higher,” Liu Shangxi, head of the Chinese Academy of Fiscal Sciences, a think-tank under the Ministry of Finance, said at a seminar in Beijing.