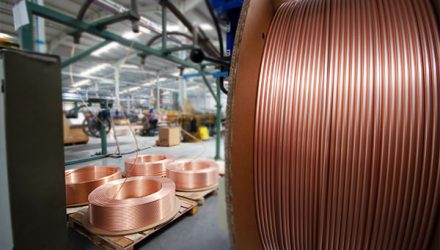 Copper Bull Run May Only Be Getting Started

The price of copper is on a tear right now thanks to news that a number of pharmaceutical companies have developed effective vaccines against COVID-19, raising hopes that the world economy will open to full capacity sooner than expected. The industrial metal rose 12.24% in November, its best month in four years. Today it was trading as high as $3.50 per pound ($7,616 per ton), its highest level since 2013.

The copper rally is due in large part to improved manufacturing activity in the U.S., China and eurozone. For the month of November, the IHS U.S. Manufacturing PMI hit 56.7, up significantly from 53.4 in October. The month-to-month increase was the sharpest since September 2014, according to IHS Markit.

Meanwhile, Chinese factories signaled their strongest improvement in over a decade. The Caixin China General Manufacturing PMI posted 54.9 in November as output and new orders surged to 10-year highs. 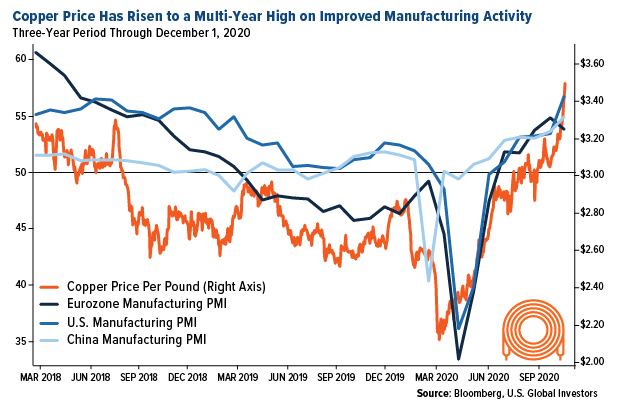 Looking at manufacturers on a global scale, you would be forgiven for not knowing we were in the middle of a pandemic and economic pullback. The JPMorgan Global Manufacturing PMI climbed from 53.0 in October to 53.7, a 33-month high. According to JPMorgan economists, this marks the fastest pace since January 2018. 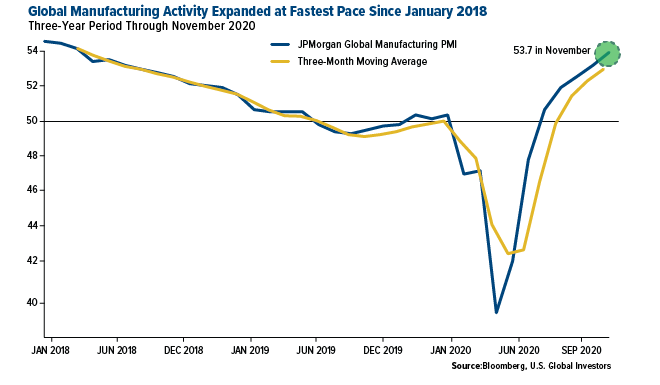 The Start of Another China-Driven Supercycle?

In light of the positive manufacturing uptrend, some economists and market experts see the start of a new copper-price supercycle driven largely by China. The Asian country currently consumes about half of all copper produced worldwide, and this share could increase as the nation undergoes a vast energy shift to renewables such as wind and solar.

This week, a senior executive at BHP, one of the world’s top copper producers, said that copper output would need to double over the next 30 years to meet surging demand for green renewable energy.

“To keep pace with these mega trends, copper production will have to double over the next 30 years,” commented Tariq Salaria, VP for sales and marketing at BHP.

Reflecting on the copper bull run, which has lifted the metal’s price some 72% since the March low, one money manager believes this rally could be one for the history books. Says Luke Sadrian, chief investment officer at Commodities World Capital, copper is “looking like it did in ’04 and ’05, and the world didn’t get the memo.”

Due to massive imports from China, copper prices increased more than 280% between the beginning of 2004 until they peaked in May 2006.

Today’s China imports of the red metal are much greater than they were then. In July of this year, the country bought a record 762,211 tonnes of unwrought copper, which is close to four times greater than the average monthly import amounts between 2004 and 2007.

In a note to clients this week, Goldman Sachs analysts said they believe the current price strength “is not an irrational aberration” but rather “the first leg of a structural bull market in copper.” By the first half of 2022, the Wall Street bank says that it’s “highly probable” copper could test its previous record high of nearly $10,150 per ton, set in February 2011.

As a result, shares of copper producers and explorers have soared. For the six months through December 3, the Solactive Global Copper Miners Index was up more than 66%, outpacing the returns for other metal miner groups. Performance for the period was driven by companies such as Capstone Mining (up 174.04%), which operates in the U.S. and Mexico; Arizona-based Freeport-McMoRan (140.68%); and Ivanhoe Mines (93.93%), which is currently developing three properties in Southern Africa.

Our favorite copper name continues to be Ivanhoe. As I reported in September, the Vancouver-based company is set to begin production at its tier-one Kamoa-Kakula Copper Project in the Democratic Republic of the Congo (DRC), believed to be the world’s second-largest copper deposit.

“Kakula is on track to begin production in under one year from now, which, considering we’ve been working in Africa for 27 years now, feels like tomorrow morning,” commented Robert Friedland, Ivanhoe’s billionaire founder and co-chairman.

Many of you listened in to my last discussion with Kevin O’Leary, “Mr. Wonderful” himself, chairman of O’Shares ETFs.

A second discussion has been scheduled and we’re now taking registrations. Among the topics Kevin and I will be covering are potential policies under President-elect Joe Biden, the post-COVID world and the implications on your portfolio.

Join us on Thursday, December 10, at 11:00 AM Eastern. Register for FREE by clicking here!

The Solactive Global Copper Miners Index includes international companies active in exploration, mining and/or refining of copper. The index includes a minimum of 20 and a maximum of 40 members. The S&P Metals & Mining Select Industry Index comprises stocks in the S&P Total Market Index that are classified in the GICS metals & mining sub-industry. The S&P/TSX Global Mining Index provides investors with a benchmark for global mining portfolios and a basis for innovative, index-linked investment vehicles.

Holdings may change daily. Holdings are reported as of the most recent quarter-end. The following securities mentioned in the article were held by one or more accounts managed by U.S. Global Investors as of (09/30/2020): Ivanhoe Mines Ltd.