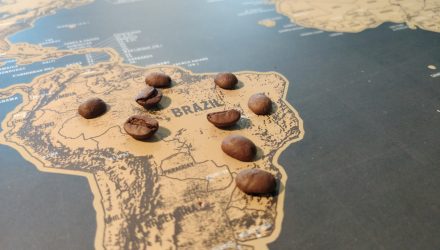 A Conundrum for the Coffee ETN Because of Brazil

Brazil, the world’s largest coffee producer, is struggling to find field workers to pick coffee beans because of border closures forced by the coronavirus pandemic.

“It’s a problem playing out across Brazil, the world’s largest producer and exporter of coffee. Most beans these days can be harvested mechanically, but at least a third of Brazil’s arabica and all of its robusta production needs to be picked by hand, either because the crops are growing on mountainsides or because machines still can’t handle certain types of trees,” according to Bloomberg.

However, some producers are preparing buyers for supply chain disruptions stemming from the coronavirus outbreak. Brazil, the world’s largest coffee producer, has more than 600 cases of respiratory illness and seven fatalities.

“Brazil, now in the higher-yielding half of a two-year cycle, is expected to produce 44.6 million bags of arabica and 15 million bags of robusta, crop-forecasting agency Conab said. About two-thirds of that is exported,” reports Bloomberg.

Coffee is one of the most volatile commodities and JO reflected as much in 2019 with plenty of supporting evidence in recent weeks.

The selling pressure was so severe that the wholesale price of arabica coffee beans even dropped below $1 U.S. a pound on the New York ICE exchange at the start of February, or a more than 30% plunge from where it was at the end of December, CBC reported.

“Brazil’s Agriculture Ministry, which has recently released a number of measures to guarantee that food supplies aren’t disrupted during lockdowns, is working on a set of recommended best practices for farmers who need to hire temporary workers,” according to Bloomberg.

Still, with time ticking on the harvest on some Latin American countries seeing an uptick in coronavirus cases, Brazil may not be able to procure an adequate number of workers to fully reap the upcoming coffee crop.

“One week past the April 27 harvest start date and the quality of coffee cherries start to worsen, becoming more susceptible to wind and rain that can knock the fruit off the tree,” according to Bloomberg.