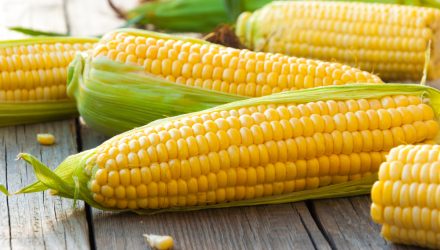 In the commodities complex, precious metals are having most of the fun this year, but tactical, risk-tolerant investors shouldn’t overlook the Teucrium Corn Fund (CORN).

“Corn prices look set to rise over the next few weeks as extreme weather and agricultural pests put a dent in the harvest of the world’s two largest producers of the grain,” reports Simon Constable for Barron’s. “In other words, corn prices could easily reach $4 a bushel, or about 24% higher than recent prices of around $3.22.”

“This year, futures prices for U.S. corn have taken a bashing, falling around 18% since the beginning of the year, when a bushel of the grain would fetch $3.92. That drop occurred because many traders believe that there will be a bumper harvest in the fall,” according to Barron’s.

For investors considering CORN right now, the good news is that forecasts calling for a plentiful corn harvest are unlikely to be realized.

“Experts say the expectation of a plentiful harvest may not get realized. That is because of problems in the U.S. and China. Together the two produce more than 600 million metric tons of corn annually, or more than half of the approximately one billion global supply of the grain, according to the U.S. Department of Agriculture,” reports Barron’s.