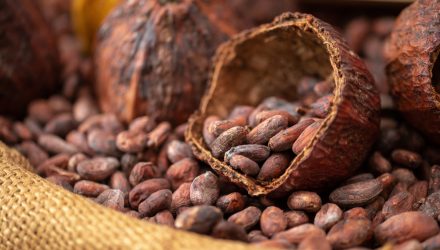 A cocoa exchange traded note has surged this month after the top producers teamed up and began to operate as what some are calling a new cocoa cartel.

The Path Bloomberg Cocoa TR Sub-Index ETN (NYSEArca: NIB) was up another 2.9% Friday after advancing 15.3% over the past week and surging 22.6% since its early November low.

Driving up December futures to a record premium over the next contract, traders turned to the cheaper cocoa beans on the ICE Futures U.S. exchange after producers from the Ivory Coast and Ghana began to both charge more for their products, which some have compared to the OPEC oil cartel, Bloomberg reports.

“The cocoa market has become a battleground,” Judy Ganes, president of J. Ganes Consulting, told Bloomberg. “Buyers are left in an uncomfortable position and tried to renegotiate the deal with asking for the premiums to be lowered. They were denied. This makes the cocoa in certified stock comparatively cheap.”

The Ivory Coast and Ghana account for almost 70% of global cocoa production. As a way to help support their local growers, the two countries last year agreed to charge a premium of $400 a ton over futures prices. This surcharge did not include another quality fee depending on where the cocoa comes from.

Due to the coronavirus pandemic and the subsequent fall off in demand, buyers have halted purchases from Africa and insisted on a discount to the fees in response to the slump in global demand.

As an alternative to the high fees from the two top producers, traders have looked to New York cocoa futures, driving up the prices as well. For example, December futures jumped to as much as $260 a ton more expensive than the March contract from a discount of $16 the day before, with the spread settling at $251 on Wednesday.

“Aggressive buying to take this cocoa has pushed up the spot contract with the short holders forced to scramble,” Ganes added. “Obviously a squeeze play, but what happens next in this cocoa war? There is plenty of other cocoa available in the market. Buyers can use Ivory Coast as a residual source, mopping up other cheaper cocoa first.”