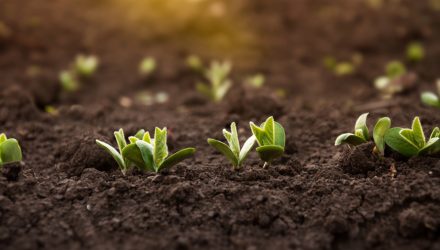 A soybean exchange traded fund has been outperforming in the commodities category as poor crop conditions and rising Chinese demand helped the soy market rally this year.

The Teucrium Soybean Fund (NYSEArca: SOYB) was up 3.0% on Tuesday and has increased 21.4% over the past three months and 18.5% year-to-date. Meanwhile, CBOT soybean prices are at around $12.99 per bushel, trading above the $12 level this year for the first time since 2014.

Bob Linneman, Kluis Advisors, argued that soybean prices were up again Tuesday as investors prepped for the end of the year, Successful Farming reports.

“This year-end position squaring (‘window dressing’) should be expected after the wild rally grains have seen. It does seem as though yesterday’s price action could have been linked to funds unwinding long soybeans and short corn. Recall a few weeks ago we discussed the scenario that soybeans had a better chance to post a bigger dollar amount rally than corn. That idea opened the door for funds to buy soybeans and sell corn as a spread trade,” Linneman stated in a daily note to customers.

“The price action in soybeans on Monday favored the bears by the end of the day. However, soybean put options reacted poorly in face of the decline. This could signal that traders are not convinced this sell-off will be sustained,” he added.

Soybean markets have been rallying on a diminished supply outlook as the phenomenon known as La Niña disrupts normal weather patterns. For instance, Argentina’s soybean crop size is projected to be smaller due to drought. Furthermore, the country is suffering from a port strike that impedes exports.

Looking ahead, Kluis Advisors believed that commodities can continue to strengthen as the aggressive monetary and fiscal policies will cause the U.S. to experience rising inflationary pressures.

“As more private analysts project an increase in inflation, many U.S. and global investors will view the grain markets as a good inflation hedge. The huge amount of debt the U.S. is creating in a low interest rate environment will provide many challenges down the road,” Kluis Advisors noted.