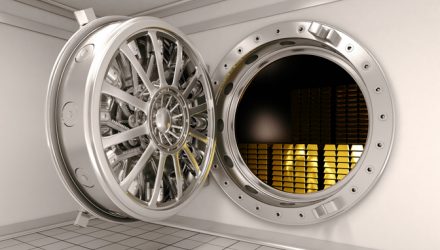 “Today, central banks around the globe hold approximately 33,200t—or 17% of the world’s above-ground gold,” said Juan Carlos Artigas of the World Gold Council (WGC) in a recent note. “And that has grown steadily since 2010—hitting an annual total of 651t in 2018—the largest annual net purchases since 1967.”

Investors have looked to GLD as a quick and easy way to gain exposure to gold price movements as they hedge against market risks, help protect their purchasing power in times of inflationary pressures, or capitalize on increasing demand from the emerging markets with a growing middle-income class.

“For two decades prior to 2010, central banks were a net source of supply for the gold market. But that changed in 2010, with central banks functioning as a net source of demand, making up 10% of annual demand on average between 2010–2017, a figure that increased to 15% in 2018,” according to Artigas.

“And the decade-long buying trend appears to have some staying power, with net purchases in Q1 2019 increasing 68% over Q1 2018,” said Artigas. “Notably, the gold buying was highly concentrated among emerging market central banks, making up approximately 93% of the 145.5t purchased in Q1 2019.”