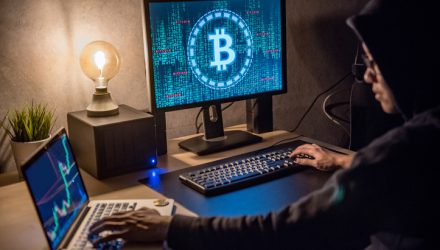 After surging in May, notching its best monthly performance in two years along the way, bitcoin pulled back earlier this month, but bullish traders are stepping back into the market, pushing the largest digital currency higher.

Still, it’s hard to shake off the fact that the cryptocurrency has been here before. After rallying to a high of roughly $20,000 in 2017, based on investors jumping on the bandwagon and trying to get rich quickly, the bubble finally burst, sinking the cryptocurrency to less than $4000 within just a year’s time. Since the bitcoin boom in 2017, the world’s largest cryptocurrency has dropped more than 60% from its high.

In 2018, bitcoin shed almost 80% of its value. Among the issues plaguing bitcoin last year were the ongoing unwillingness of U.S. regulators to approve bitcoin-related exchange traded funds as well as data indicating that mainstream acceptance and adoption of the digital currency are declining.

Facebook’s recently announced foray into digital currencies is seen as a boon for bitcoin.

“Cryptocurrency market experts and investors are associating the sharp price gains seen over the last six days with a number of factors, the most prominent being Facebook’s coming foray into cryptocurrencies,” reports CoinDesk.

“There is a consensus in the investor community that Facebook’s crypto will create awareness that a private, non-central bank issued currency can exist, leading to increased adoption of bitcoin and other cryptocurrencies,” according to CoinDesk.

“As noted earlier, bitcoin may see a pullback following Facebook’s announcement on Tuesday. The long duration charts, however, indicate that corrections, if any, could be short-lived,” notes CoinDesk. “Bitcoin jumped 17.57 percent last week (above left), invalidating the bearish view put forward by the previous week’s close below $8,000.”