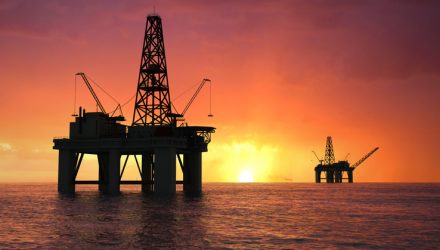 Crude oil is the most abundant and most traded commodity in the world, and it is one of the first places market participants look when seeking commodity exposure. Crude oil prices are also closely watched as investors try to glean clues about global economic growth; even after the collapse of oil prices in 2014, the commodity remains a bellwether for economic activity and market sentiment.

However, it is important to distinguish between the two most commonly traded contracts of crude oil in the markets: Brent and West Texas Intermediate (WTI). Brent refers to oil that is produced in the Brent oil fields and other sites in the North Sea. Brent is the benchmark for African, European, and Middle Eastern crude oil and is often considered the benchmark targeted by OPEC. WTI crude is sourced from the U.S. and is seen as the benchmark in the Western Hemisphere. Both are light, sweet crude oils, although WTI is generally sweeter and lighter than its European counterpart. 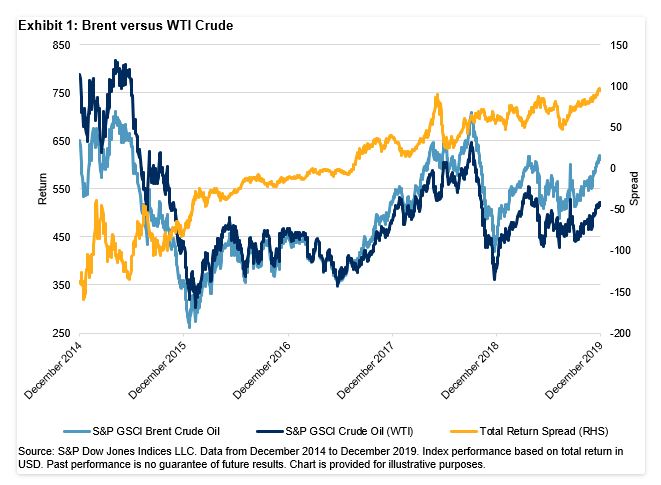 As the American shale revolution has taken hold, cheaper production has led to lower breakeven costs for U.S. producers of WTI crude oil. In 2019, daily U.S. crude production surpassed Russia and Saudi Arabia to rank the country as the world’s largest oil producer. This helped to keep a lid on WTI prices.

Combining to account for about a third of world oil consumption, China and the U.S. are the world’s largest importing countries. The start of the U.S.-China trade war in the summer of 2018 caused large oscillations in the spread between the S&P GSCI Brent Crude Oil and the S&P GSCI Crude Oil (see Exhibit 2). The trade war coincided with sanctions on Iran and Venezuela and a change in OPEC production targets. 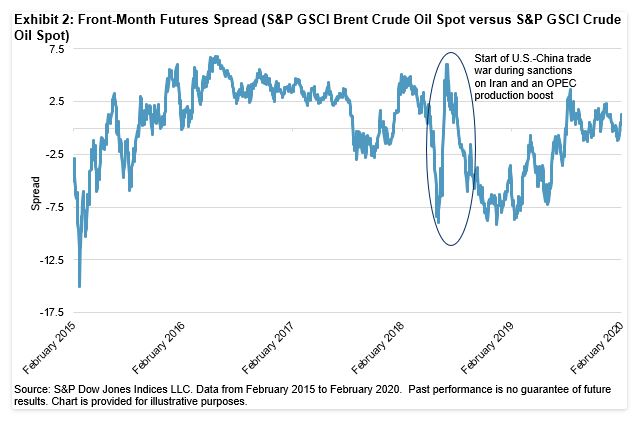 The correlation between Brent and WTI prices is close to one, but there are idiosyncratic factors driving the performance of each. Historically, Brent crude oil was more affected by geopolitics than was WTI crude oil. Currently, geopolitical tensions are markedly high in the Eastern Hemisphere, where most of Brent production and distribution takes place. Flare-ups have led to higher beta moves by Brent crude oil during price spikes in comparison with WTI crude oil. A blog by Fiona Boal, Head of Commodities and Real Assets at S&P DJI, details the market reaction to the escalated tensions in January 2020 between Iran and the U.S. and discusses structural changes in the oil markets. OPEC+ has attempted to affect Brent crude oil prices specifically as the oligopoly collectively has acted to maintain certain levels of production in an attempt to manage prices.

WTI crude oil has historically been less sensitive to geopolitics, and short-term price moves have often closely tracked U.S. crude inventories. The largest customers of WTI crude oil differ from those of Brent crude oil. Before the lifting of the 40-year-old export ban by the U.S. in 2015, 94% of WTI was imported by Canada. However, this reliance on one export market has fallen considerably, and the U.S. is now a key exporter to Asia and Europe.

Our colleagues at S&P Global Platts constructed an interactive periodic table of oil illustrating the differences in crude oil grades in more detail.

S&P DJI offers a robust menu of crude oil futures-based indices tracking Brent and WTI crude oil. Variations of each, including leveraged and inverse versions, can be found through the Index Finder on the S&P DJI Index website.