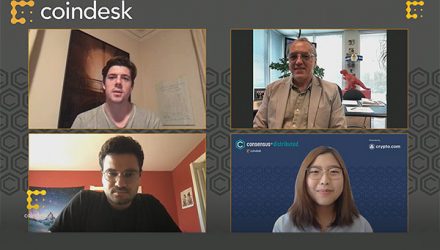 Last week I was honored to participate in the first virtual Consensus cryptocurrency conference, hosted by CoinDesk. In years past, the annual gathering—attended by the world’s biggest crypto and blockchain companies, experts, entrepreneurs and investors—has been held in New York, but in an effort to curb the spread of the coronavirus, everything was moved online.

I was impressed with CoinDesk’s ability to adapt to unforeseen circumstances, and I want to thank them for the opportunity to participate.

No doubt many were disappointed to lose the in-person Consensus experience this year, but I believe it may have turned out for the better. Attendees were able to listen in to every panel and seminar for free, and from the safety of their own homes. This potentially allowed speakers’ thoughts and ideas to reach even more crypto investors than it otherwise would have. You can watch the replay by clicking here.

One of the biggest reveals from last week is that billionaire hedge fund manager Paul Tudor Jones became among the first institutional investors to take a stake in bitcoin, the largest digital currency by market cap, as a hedge against inflation sparked by massive money-printing.

Jones told clients that bitcoin reminds him of gold in the late 1970s when consumers prices began to go off the rails. Adjusted for inflation, the price of gold actually peaked not in 2011, but in 1980.

“The best profit-maximizing strategy is to own the fastest horse,” Jones wrote. “If I am forced to forecast, my best is it will be bitcoin.”

Another big topic of discussion was the bitcoin halving that took place last Monday. This is only the third such halving in bitcoin’s 11-year history, the first occurring in November 2012, the second in July 2016.

In case you’re unfamiliar with the term, a “halving” is an artificial, preprogrammed means to control the supply of bitcoin. It “pumps the brakes” on the issuance and circulation of new units of the cryptocurrency.

Before the halving, crypto miners were rewarded with 12.5 bitcoin every time their powerful network of computers solved a complex math problem. Today, though, that reward has been cut in half to 6.25 bitcoin.

The next halving will limit the reward to only 3.125 bitcoin, and so on, until all 21 million bitcoin are mined. As of last Thursday, about 18.4 million bitcoin were in circulation, according to Blockchain.com, meaning there’s only 2.6 million remaining up for grabs.

So what happens now? To answer that, I think it’s helpful to remember that bitcoin is like any other asset, in that it responds to the dynamics of supply and demand.

West Texas Intermediate (WTI) crude hit $140 per barrel in June 2008 when it was believed that oil exploration had peaked. But the U.S. fracking industry changed the game, allowing crude to be extracted from areas that were previously unattainable. Global oil prices collapsed in 2014 as U.S. production ramped up, and today WTI is trading just under $30 per barrel, about 80 percent off its record high.

Gold prices, as I’ve explained before, have benefited from the fact that we’re close to exhausting the world’s gold deposits, or at least those that can be feasibly developed using current mining technology. Short of a breakthrough in a similar “fracking” process, producers are looking at increasingly less reward in mineral output for the time, money and effort that they spend digging the metal out of the ground.

Sound familiar? It should, because bitcoin prices have followed the same trajectory.

In the months following the first and second halvings, bitcoin prices surged as it became abundantly clear that at some point in the near future, new bitcoin issuances will come to a halt. Time will tell if the same will happen this time, but I’m very bullish.

That’s just the supply side. What about the demand side? If few to no people have any use for or interest in an asset, then it doesn’t have much value.

Conversely, the more people that use something, the greater its value has generally become. In economics, this is what’s known as Metcalfe’s Law. Consider oil in the 19th century. Humans have been aware of and indeed have used petroleum for centuries, but it wasn’t until the advent of the automobile that the scramble for “black gold” really began, making some early oil barons like John D. Rockefeller incredibly wealthy.

Again, bitcoin—and cryptocurrency as a whole—is no different. It’s a nascent industry, but we see that more and more users are finding their way into digital currencies, which raises the total value. According to Blockchain.com data, just under 50 million unique crypto wallets have been created as of May 2020, a change of 10 million from just a year earlier.

“We’re right where oil was in 1890,” commented Alex Leigl, CEO of Layer1, during our panel discussion on Monday.

The analogy is a compelling one. It suggests not only that we’re at the forefront of something new and bold, but that there could be many years of maturation and innovation ahead of us.

What an exciting time to be an investor!