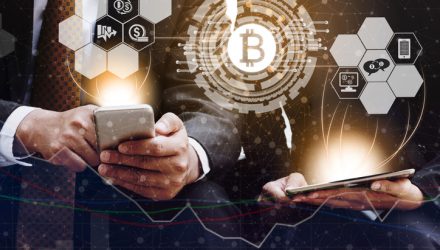 Bitcoin has jumped more than 50% since Jan. 1 and there could be more upside awaiting the largest cryptocurrency with a scheduled halvening later this year.

Unlike fiat currencies, which can be printed by central banks at will, with only 21 million bitcoins ever allowed in existence, the supply of the cryptocurrency is limited algorithmically. After the next halving, only half as many BTC will be generated per day. (4,380 x 6.25 x 5,000 = $136,875,000 per month).

“The other thing that ought to be sending Bitcoin bonkers is that ‘mining’ new coins using computing power is about to become half as rewarding,” reports Jack Hough for Barron’s. “That automatically happens every four years or so. Some Bitcoin watchers call it the halving, and some call it the halvening.”

If Bitcoin holds around $9,700 or trade slightly higher, it could bring more interest in the form of crypto funds. Investors who are hesitant to jump into crypto assets may see the lower price volatility as a more favorable option to equities.

“In the past, halvenings have come with new highenings,” according to Barron’s. “The price was $10.50 at the time, which might not sound like much, but that was up from half a penny in a year, making Bitcoin the world’s top-gaining currency by far. There was a halvening in 2012, and by late 2013, Bitcoin hit $400.”

Bitcoin’s historical volatility trends, which have ebbed somewhat, have often prevented some market observers from calling the digital asset a safe-haven on par with gold, but the coronavirus headlines could be prompting some investors to revisit that thesis.

There is an increasing global acceptance that cryptocurrencies, such as Bitcoin, are not only the future of money but increase the money of today. As is the case with gold, there’s also an element of scarcity associated with Bitcoin.

For more on alternative strategies, visit our Alternative Investment Channel.