You are at:Home»Alternatives Channel»Bearish Could be the Way to go With Greenback ETFs 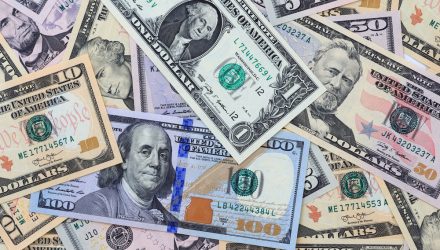 Bearish Could be the Way to go With Greenback ETFs

Among currency ETFs, the Invesco DB US Dollar Bullish (NYSEArca: UUP) is impressing again this year.

UUP tracks the price movement of the U.S. dollar against a basket of currencies, including the euro, Japanese yen, British pound, Canadian dollar, Swedish krona, and Swiss franc. Now, some currency market observers are banking on more downside for the greenback.

However, some market observers are growing bearish on the dollar, meaning it could be time to look at the Invesco DB US Dollar Index Bearish Fund (UDN), UUP’s bearish counterpart.

“After having trended higher since mid-2011, the U.S. Dollar Index is on the verge of declining and beginning an important correction,” reports Andrew Addison for Barron’s. “The index’s monthly closing chart shows that the dollar stalled again at a 33-year trendline. This trendline has proven to be formidable resistance many times since 1987.”

UDN seeks to track the changes in the level of the Deutsche Bank Short US Dollar Index Futures Index, which reflects the changes in market value over time, whether positive or negative, of a short position in the DX Contract which expires during the months of March, June, September, and December. The fund seeks to track the index by establishing short positions in DX Contracts. DX Contracts are linked to the six underlying currencies, or the index currencies, of the U.S. Dollar Index (USDX®), or the USDX®. The index currencies are Euro, Japanese Yen, British Pound, Canadian Dollar, Swedish Krona, and Swiss Franc.

“Why might the dollar begin a bear phase? Maybe global investors will lose faith in the dollar because the U.S. has been unable to control the Covid-19 pandemic,” according to Barron’s. “By contrast, most developed countries have flattened their curves, and their economies are likely to recover sooner than ours. The differing growth trajectories would favor other currencies, such as the euro.”

Data confirm that the Dollar Index is nearing correction territory, which if realized, could hasten more declines.

“Fast-forward and you can see that a rounding top formed at major resistance. A decline below 95 would complete the top and project a decline of at least 10%. Such a decline would turn all of the index’s moving averages downward—confirming a major trend change to the downside,” reports Barron’s.